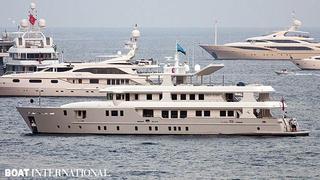 Every year a large fleet of superyachts anchor off Monaco during the show. It's always the opportunity to discover or rediscover some yachts. This year a newcomer was spotted and her name is Deep Story. She's a 45.16 metre motor yacht recently launched by the Turkish yard Orkun Yachting.

Deep Story is powered by twin 776kW Mitsubishi engines, giving a top speed of 15 knots and a cruising speed of 13 knots.

Special features include a retractable hardtop on the sundeck, giving enough space for a helipad.

Deep Story is the fifth motor yacht delivered by Orkun Yachting. The shipyard is now preparing a sixth project with a length of 38 metres.