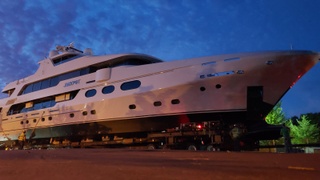 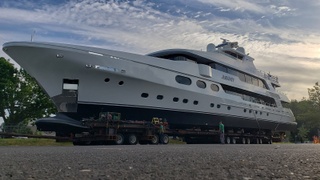 US yard Christensen has launched its 50-metre superyacht Jackpot ahead of its move to Tennessee.

Commissioned by a “pair of highly experienced New Jersey yachtsmen”, Jackpot will be the last yacht ever to be completed at the builder’s Vancouver based yard.

Previously known as Hull 38, Jackpot will be powered by two MTU diesel engines for a top speed of 15.5 knots and cruising range of 4,000 nautical miles at 10 knots.

Accommodation will be for a total of 12 guests and a staff of 10 crew. The yard revealed that the yacht will soon be cruising up the US East Coast.

While Jackpot is the last yacht to have been completed at the Vancouver based facility, it will not be the last to be launched. The “partially completed” Hull 42, also 50 metres, is set to be launched there next week before it is delivered to the client who will complete the yacht elsewhere.

Christensen’s new Tennessee facility meanwhile is set to be up and running by this summer. The 450,000 square metre facility will expand the yard’s size range to over 70 metres and include a 55 acre climate controlled shed and 13 individual construction bays.

The size of the new facility will also mean that the yard can begin building in other materials, such as steel.

The Vancouver yard has been sold to Vigor, a large Portland based commercial builder, and will now be used to build a new generation of landing craft for the US Army.

Christensen chairman Henry Luken revealed that former owners have already approached the company with interest in its extended range of 55 – 65 metre yachts.

“This is a huge step for us, but also for American yacht building, which has been in steady decline for the last two decades,” Luken said.

“In our new range we can now compete with any builder in the world in both price and quality and, unlike our existing facility, we can offer yachts virtually unrestricted in beam.”