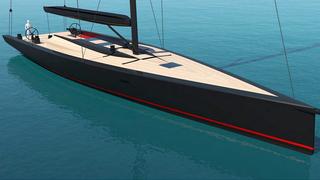 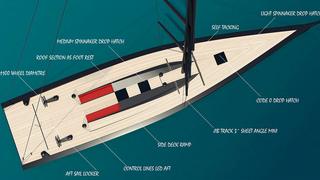 Could the new P100 concept become the fastest ever WallyCento?

The London-based yacht designer Philippe Briand aimed to “push the envelope like has never been done before” for this contribution to Wally Yachts’ 100-foot “box rule” WallyCento class.

To evaluate the feasibility of its design for the Wally racer-cruiser class, Philippe Briand and his team carried out extensive assessments, completing a computational fluid dynamics (CFD) analysis as well as velocity prediction program (VP) calculations.

Based on these tests, Philippe Briand proposes the P100 concept yacht with a lower freeboard and narrower beam than previously seen in the WallyCento class. The light-displacement yacht would weigh two tons less than the upper limit stipulated by the class rules. It’s expected that P100 could be 20 seconds faster over a mile than Wally sailing superyacht Magic Carpet3, which was used as the reference yacht for speed analysis.

The reduced weight comes in part from the unique undulating “roller coaster wave form” teak decking, which also appeals to the WallyCento brief that the fleet should maintain a high-quality look.

To ensure weight savings inside as well, Philippe Briand has specified the P100 concept yacht with light materials on the ceilings and walls, and moulded carbon furniture – inspired by automotive design – will further reduce the interior weight.

“We considered the merits of each element in the P100 design, using technological advancements and through analysis to create a truly unique concept. The combination of technical enhancements and design features results in a beautiful project that promises top competitive performances,” said Philippe Briand of the concept yacht.