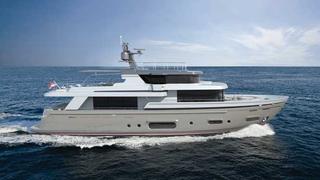 The 27.4m and 42.6m yachts have been designed for Intec Marine Shipyard in the Netherlands. The 90 (27.4m), at a more advanced stage of design, will feature two electrical drives for propulsion to a cruising speed of 10 knots and a top speed of 12 knots. Hotel needs will be served by a combination of two lithium-Ion iron phosphate battery packs, 30 square metres of solar panelling in a bimini top, and two silent wind power generators in the mast.

The absence of traditional engines reduces noise, vibration, emissions and allowed the designers to create a super-sleek engine room that de Groot says is ‘as clean as a hospital – you don’t see any technical parts, everything is hidden’.

But it also leaves more space for living spaces. ‘The engine room itself is smaller, so the interior design also benefits,’ says de Groot. ‘We managed to get a good interior layout on the lower deck, with three large guest cabins, a master and also very good crew cabins.’

The designer has made good use of the communal areas on the main deck, arranging them to ensure as much contact as possible with exterior decks.

‘We didn’t do a saloon with a dining area,’ says de Groot. ‘We have a large saloon aft, then a nice galley connected directly to the crew area, a central lobby then forward there is a dining room directly connected to the forward deck with forward sliding doors.’

In recognition of the fact that many prefer alfresco eating when on board, the design also features a large aft deck with a good dining space, plus a less formal dining area aft of the wheelhouse on the upper deck.

Along with expanded configurations of the batteries, solar panels and wind turbines in the 90, the 140 (42.6m) will have a newly-developed linear propulsion system by Voith with Siemens electro engines. Two identical generators will be used to reach the 12 knot cruising speed and two turbines for reaching 25 knots.

‘The 140 is going to be quite a special boat,’ says de Groot. ‘It has basically the same spec but it is faster, it is diesel electric but also semi displacement.’