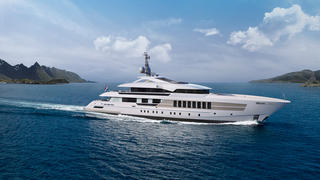 Heesen Yachts has announced that YN 18455, also known as Project Antares, a 55 metre fast displacement motor yacht, has been sold to an American client by Thom Conboy of Heesen USA.

12 guests will be accommodated in six luxurious cabins, including a full-beam VIP suite plus two twins and two double cabins on the lower deck, and an impressively spacious 80 square metre owner’s apartment on the main deck forward.

Francesco Paszkowski commented: “The style we have created in collaboration with Margherita Casprini for this new Heesen 55 metre couples the aesthetics of the most contemporary Italian design with the ingenious engineering typical of this Dutch shipyard.”

Thanks to the progressive hull design devised by Van Oossanen Naval Architects, Project Antares offers a maximum speed of 16 knots and frugal fuel consumption, resulting in a remarkable range of 4,500 nautical miles at 13 knots.

Mark Cavendish, marketing director at Heesen Yachts, concludes: “One of the most interesting features on the boat will be that she’s being set up to act as a sort of mothership to the owner’s fishing boat — he’s a keen sportfisherman so he wanted a much bigger yacht to base his operations from. Also, in the evening, one or two sportfishing boats will be able to lie alongside the Heesen and be fuelled and powered from it so it’s a mothership to a big operation. It’s rather an exciting use for a boat, quite refreshing.”

Project Antares will undergo intensive sea trials in the North Sea prior to delivery to her new owners in November 2018.