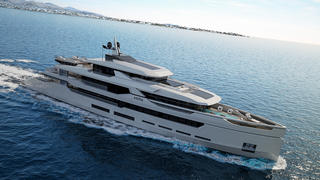 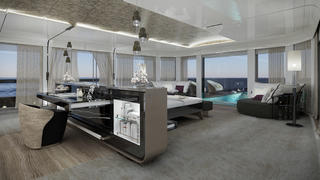 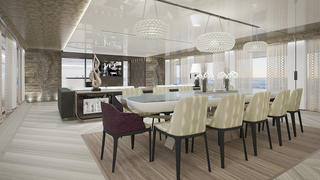 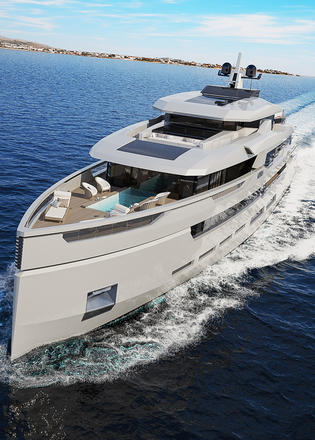 Aouda would be built to ABS and LY3 standards from a steel hull and aluminium superstructure, with an estimated construction time of 28 months. Her 11 metre beam allows for a highly spacious interior totalling 1,100GT. The yard adds that the name comes from Princess Aouda, a character in Jules Verne's 1873 novel Around the World in 80 Days.

Accommodation is for 12 guests split between an owner’s cabin, three doubles and two twins, while the crew quarters have been designed for a staff of up to 14 people. Standout features include the main-deck owner’s suite, which boasts direct access to the foredeck and its five metre superyacht spa pool, complete with waterfall feature.

Take a closer look at the Sarp Yachts concept Aouda

As well as the refined interiors, Auoda is notable for its myriad options for al fresco relaxation. The upper deck superyacht helipad doubles up as a large outdoor entertaining space, while the main deck includes a second spa pool. Finally, the superyacht beach club includes a cocktail bar, ideal for enjoying a relaxing sundowner in close proximity to the sea.

Power would come from a pair of 1,500hp CAT 3512C diesel engines for a top speed of 16.5 knots, the total fuel capacity of 110,000 litres would allow for a maximum cruising range of 4,000 nautical miles at 12 knots, and Naiad zero-speed stabilisers would ensure a smooth cruising experience.