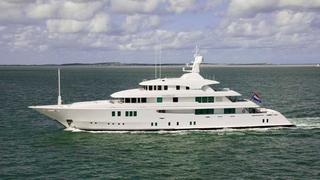 The yacht and crew set sail just before Christmas where the owner took possession near the coast of Norway. Despite strong waves, heavy snowfall and strong winds during the hand-over ICON reports that the yacht, whose sea trials we reported in April 2012, performed well.

According to Jen Wartena, general manager the Maidelle is by far the best boat out of the three-yacht series benefitting from the lessons learned on the builds of Icon and Baton Rouge.

Maidelle's Captain Donald Heath is also proud of his vessel. ‘I’m very pleased with the build quality of the yacht,’ he says. ‘She behaved very well on delivery in some pretty awful weather, and generally gave the impression of being a solid and safe sea boat.’

Built for an experienced owner, Maidelle's exterior styling is by Redman Whiteley Dixon Design with interior design from Cristiano Gatto. A key factor in the layout was the owner’s desire to create large entertainment areas, both formal and informal, to share with his guests, and also reflects his need for spacious but private family areas.

Maidelle is now on her way to Spain.