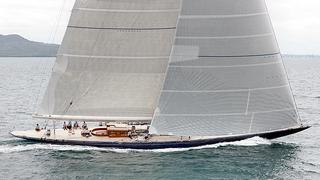 While the launch of a new J Class 'replica' yacht is imminent in the Netherlands, the iconic J Class sailing yacht Endeavour is reported to be ready to leave New Zealand after successful sea trials following her 18-month refit at Yachting Developments.

No less than 100,000 man hours have gone into the project and over 40 tonnes of material was removed and replaced on the vessel during the refit. The full scope of the project was described in our report on Endeavour's relaunch in October 2011, but in brief it included changes to many of the yacht's major components from the engine and technical equipment to the rig and deck, and required structural modifications to accommodate a new deck layout.

New pictures of Endeavour show her new sail plan by Dykstra Naval Architects, who were also involved in the design of the deck layout and the structural engineering.

Her interior was also completely reconfigured and redesigned by Jon Munford and Adam Lay with work carried out by Yachting Developments’ in-house team of craftsmen.

Endeavour will now start her journey to the Northern Hemisphere where she is due to compete in the 2012 J Class regattas in Falmouth and the Solent, UK, which will coincide with the London Olympics.