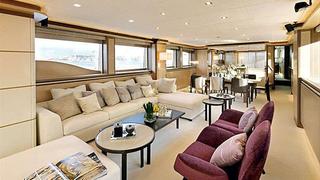 Launched earlier this year, the 32m motor yacht Agora is now delivered to her Japanese owners by Horizon.

Agora was ordered in June 2012 by a repeat client. She comes from the RP105 series, which is based on the successful RP97 series. Designed by the yard’s in-house team and built to RINA classification, she has a an enclosed flybridge with a large skylounge.

Her delivery showcases her interior that was designed by Luca Dini. It accommodates 10 guests in a main-deck master suite and four double cabins on the lower deck.

Powered by twin 1,417kW Caterpillar C-32 engines, Agora achieves a top speed of 22.5 knots and a cruising speed of 17 knots.

Agora is now cruising to Japan.