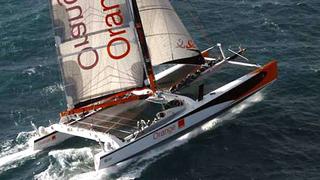 The Multiplast yard has announced that the famed catamaran Orange II is to be given a new lease of life and renamed Vitalia II.

This boat, skippered by Bruno Peyron, held the Trophée Jules Verne (the round-the-world speed record, with crew) from 2005 and 2010, circumnavigating in 50 days, 16 hours and 20 minutes. It was also the fastest boat across the North Atlantic Ocean, the Mediterranean Sea, and held the 24 hours speed record (766.8 miles with an average of 31.95 knots).

Designed by Gilles Ollier Design Team, and built by Multiplast yard, Orange II, which is 118 ft long, is an extraordinary yacht with an impressive history. But now she is to be converted from an out-and-out racer into something more useable by new owner François Bich, a man who in 1970 and 1974 took part in the America's Cup on France, in Newport. Passionate about multihulls, from Hobie Cats to Formula 40, François Bich 'is one of the rare boat connoisseur able to give a second life to Orange II. He knows he will get an exceptional boat on which to go around the world,' said Multiplast.

Bruno Peyron said: 'I'm proud of this story of conquest, proud of this boat that allowed me to win my third Trophée Jules Verne, proud of my friends with whom I've shared so many hours and magic nights around the world, and I'm so delighted that François Bich and the Multiplast yard have the audacity and the vision to embark upon this extreme and ambitious refit. This refit probably signals a positive turning point for the cruising catamaran's evolution and...I love audacity!'

The original designers of Orange II, Jack Michal, Franck Martin and Yann Penfornis, went through their old drawings and calculation notes in order to produce the modifications for Vitalia II. The aim is to transform this boat into a (very) fast cruising boat without losing its racing DNA. Thus, a 753 ft² aerodynamic structure will be added at the back of the mast. Six cabins will be fitted in the hulls: three double cabins for guests and three more for the crew.