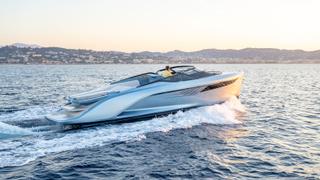 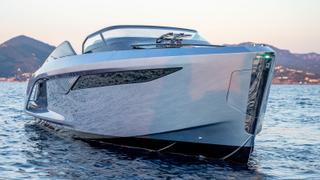 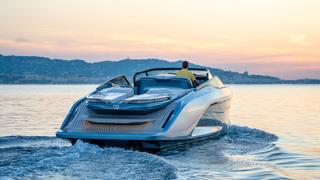 British yard Princess Yachts has debuted its fastest ever yacht, the 50-knot R35 foiling sports yacht at the Cannes Yachting Festival, and opened up about the famous names and high-tech construction involved in its creation.

At a glamorous event at Château de la Napoule on the Riviera, Antony Sheriff, executive chairman of Princess Yachts unveiled the first Princess R Class performance sports yacht, which was craned in for the occasion.

He described it as a “ the future of Princess today”, a distillation of the yard's capabilities and aspirations.

The 10.89m R35 was designed with America’s Cup technical experts Ben Ainslie Racing Technologies (BAR Technologies) and Pininfarina, the design house famous for some of the most beautiful sportscars in the world.

“We’d been working in the America’s Cup on hydrofoils,” said Martin Whitmarch, former CEO of the Land Rover BAR America's Cup team, who was head of Formula One team at Maclaren for 20 years.

“Flying on hydrofoils is an uncomfortable business when you land, so we didn’t quite go that far but we realised that by using some very clever foils that are actively controlled, not only could we make efficiency improvements in the order of 30 per cent, but we could affect the ride handling and sea keeping of that boat in a unique way," he said.

"It really is an usual feeling boat. When you’re up on hydrofoil its incredibly smooth, incredibly comfortable. And the performance we’re going to get from this boat is going to be something quite unique.”

The carbon-fibre monocoque hull was designed with Pininfarina, which enhanced the boat’s aerodynamics with sleek air blades to maximise engine airflow, while controlling vortices and turbulence to stern, to improve comfort.

“It is function and beauty at the same, time,” said Paolo Pininfarinia, chairman of Pininfarina. Inside, high-tech kit includes a glass panel helm, Naim audio systems and Esthec flooring.