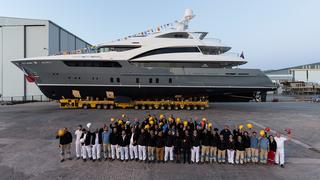 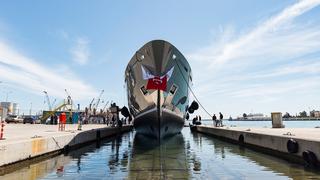 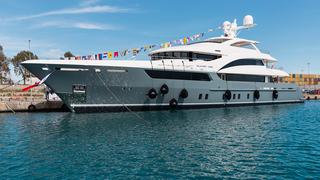 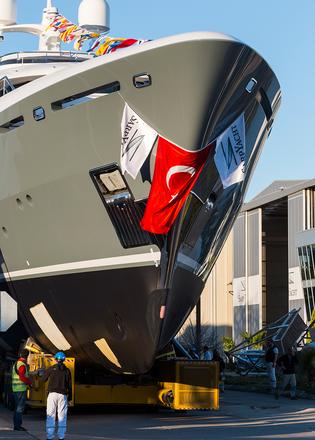 New Turkish shipyard Sarp Yacht has launched its first ever superyacht, the Sarp 46. The yard says Sarp 46 will carry the quality of a Northern European boat and the price tag of a Turkish one. ( Sarp 46 is for sale with Northrop & Johnson, asking €22.5M).

The first Sarp 46 was built at the company’s Antalya facility.

The builder has worked with designers on six boats, sail and power, but thinks the 46 metre, with a price of around €21.5 million, makes the most attractive immediate proposition.

The yacht was designed internally by well known British designer Adam Lay and externally by Taka Yacht Design, the company behind the look of 47.6 metre Turquoise Amphitrite.

“Her shape and size are carefully refined to stay just below the 500GT mark,” says Tanju Kalaycioğlu from Taka. “Steel was the obvious choice for a strong and reliable hull with ample tank capacity. However we opted for epoxy composite to construct our curvy superstructure. This way, we could save weight from superstructure and fairing compound.”

Using a composite superstructure also makes future repairs easier and dampens noise and vibration, according to Emre Sandan, shipyard manager. “It’s a complicated shape and using aluminium could lead to problems down the road,” he adds.

The layout of the Sarp 46 features a roomy main deck saloon, galley and an owner’s suite forward. The lower deck has been given over exclusively to accommodation for guests and crew.

The upper deck has a captain’s cabin just behind the bridge and space for formal outdoor dining to the rear, while the sundeck gets a bar, more dining space and a vast sunpad area.