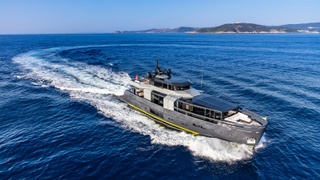 The second hull in Arcadia’s 105 World Superyacht Award winning series has been delivered.

Sea Coral II will be available to charter for this summer season and will be specifically cruising Amalfi, Sardinia, Corsica and the South of France. It comes after the first hull in the series, RJ, scooped a World Superyacht Award at last weekend’s glittering event.

Based on the same platform as the Arcadia 100+, the Arcadia 105 was developed in collaboration with the Hot Lab design studio, who worked with the yard on both the exterior design and the interior décor.

The 199GT semi-planing superyacht has been constructed with a fibreglass hull with a beam of 7.76 metres.

Standout features on the Arcadia 105 include a convertible skylounge that measures 35 square metres. Meanwhile, the main deck offers enough room for up to 10 guests to enjoy a meal in the shaded cockpit.

Accommodation is for a total of 10 guests in two doubles, two twins and one convertible cabin, while the staff quarters allow for a crew of six.

Sea Coral II is equipped for charter with a Castoldi tender stored aft, along with two paddleboards, two Seabobs, a Kayak, wakeboard and water skis. Power comes from a pair of MAN V8 1200HP engines with a cruising speed of around 13 knots.