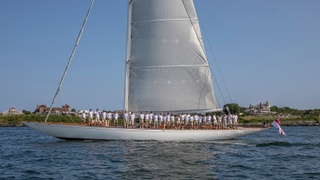 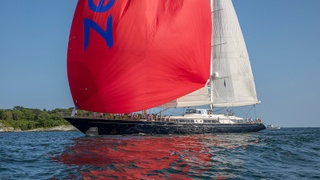 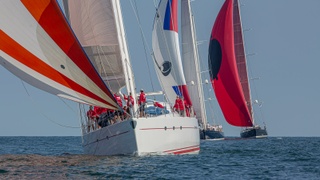 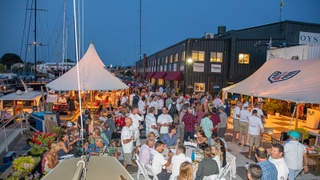 A total of 12 sailing yachts measuring 20 to 56 metres went head to head on the water as Newport’s 2019 Candy Store Cup got underway.

The superyacht regatta, which builds on the legacy of the original Nantucket Bucket, took place from July 25-27 and kicked off on Thursday afternoon with a captain’s meeting.

Here Principal Race Officer Peter Craig briefed the captains and crews on what to expect on the race course.

“Both days were forecasted for light-to-medium wind and they were spot-on,” he said. The briefing was followed by an evening reception at Clarke Cooke House where the competing yachts’ owners enjoyed fresh sushi and champagne.

Racing kicked off at 1pm on Friday with staggered starting times for each of the three classes. The 24 metre OysterRaven Claw took the Class A crown while the 56 metre Perini Navi yacht Zenji took advantage of the late building breeze to win Class B. The 30 metre Hodgdon-built yacht Delta House was victorious in Class C.

A light breeze delayed the start of racing on the second day of the regatta, with racing concluding off Castle Hill lighthouse at around 5pm. The 20 metre Martin Marine-built sloop Sirona rose to victory in Class A while the 33 metre Nakupenda pipped Zenji to the post in Class B. The 27 metre Concordia custom built sloop Savannah won Class C on Saturday.

Owner Hugh Morrison said: “Savannah’s return to Newport exceeded our expectations on every level and our welcome at Newport Shipyard and being able to sail in the Candy Store Cup was handled with total professionalism and efficiency.”

The regatta concluded on Saturday evening with a prize giving and American themed party attended by over 300 sailors, owners and sponsors.

Clive Youlten, captain of Nakupenda, said: “The yacht’s owner, his guests, and all of the crew onboard felt the regatta organizers did a great job keeping it fun and low-key.”

Newport Shipyard managing partner Charlie Dana added: “This year’s Candy Store Cup was another home run. Sailing runs in our blood here at the shipyard and seeing these impressive yachts line up off Castle Hill was a terrific sight.”