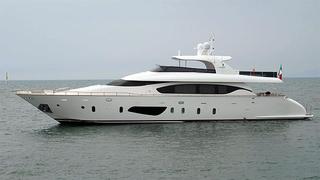 Built in composite at the Maiora facility in Viareggio, the 27.53 metre yacht, named Antarah, was entirely engineered and designed by Fipa Group’s in-house team. The design team was lead by the designer Riccardo Paoli.

Antarah accommodates eight guests in four cabins on the lower deck, but what is unusual is her layout, which offers two separate areas for guests. The master and VIP cabins, which are accessed from the main saloon, both have large windows in the hull providing natural light and beautiful sea views - a first on the Maiora 27. The two other double guest cabins are accessed separately from the wheelhouse forward.

Antarah will be delivered this summer.