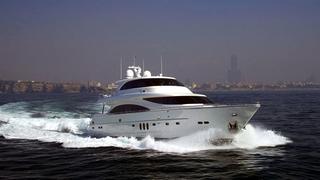 Horizon has announced the delivery of the motor yacht E88 displayed at last month's Fort Lauderdale Show. This yacht is the first of this series for the US East Coast and her new US owners will soon be enjoying her during a cruise in the Florida Keys.

At the same time, the fourth E88 was finishing her sea trials in Kaohsiung, Taiwan. Called Mineral Water, she's currently being shipped to Australia where her owners will enjoy her for Christmas.

The E88 series has a modern design by John Lindblom, but retains her styling with the other yachts from the E series. Built in composite, she has a length of 27.24m. Her generous interior accommodates eight guests in a full-beam master suite, VIP stateroom and double and twin cabin. Two versions are available, with hardtop or enclosed sundeck. Powered by twin Caterpillar or MTU engines, her performance-oriented hull allows top speeds over 20 knots.

Horizon also reports strong activity during FLIBS 2011. 'Horizon had our busiest show in three years at FLIBS,' says Roger Sowerbutts, Director of Horizon Yachts Inc. 'Our after-show follow ups have gone very well, and we have a number of expected deals as a result.' One of them was an order for a PC58 catamaran yacht which made her debut during the show.