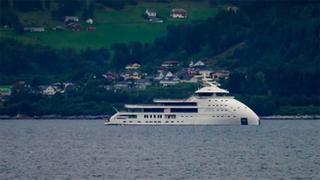 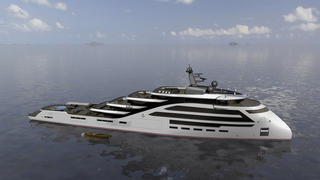 The 88.5 metre Espen Øino-designed explorer yacht, which is now known as Olivia O, was captured by local photographer Knut Erik Haaheim being put to the test in Norway.

The Norwegian yard has not revealed any official design renderings, but it has previously confirmed that the Ulstein explorer yacht will be based on its proven X-Bow platform (pictured below).

Kristian Sætre, managing director of Ulstein Group, previously said: “The customer wants the characteristic X-Bow from Ulstein and together with Espen Øino, responsible for the exterior design and GA-plan, we have developed a solid yacht project.”

Planning and engineering work began on the boat in November 2016. The 88.5 metre yacht will become one of the world’s largest explorer yachts when she is delivered later this year.

It is thought the finished yacht will feature extensive exterior relaxation spaces and a circular superyacht spa pool on the aft deck.

Øino has brought his extensive experience from designing many of the world’s largest explorer yachts, including Octopus, Bella Vita (ex-Northern Star) and Skat for German yard Lürssen as well as Abeking & Rasmussen's Cloudbreak.

This is the first superyacht project for Ulstein Verft, which has been building offshore support vessels and commercial craft in Norway for the past 99 years.