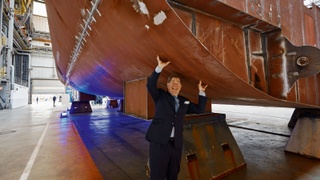 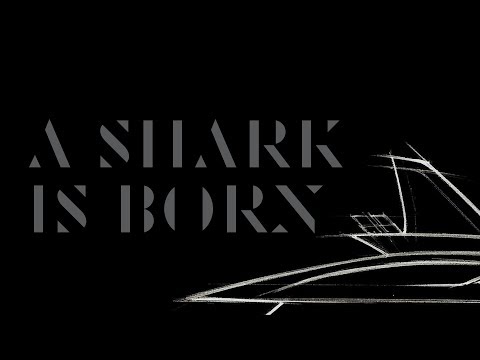 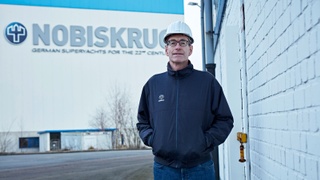 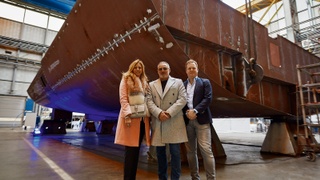 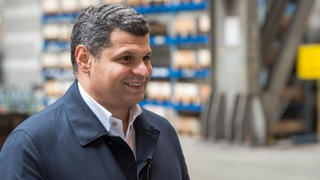 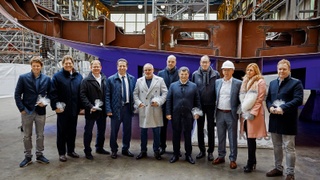 Boat International talks to the dream team behind the upcoming 77-metre superyacht Project 793, by Nobiskrug, aka Black Shark.

"In Monaco, this yacht is going to dominate", says superstar designer Andrew Winch with conviction during the keel-laying ceremony of 77-metre Project 793, aka Black Shark.

It has taken 18 months of hard work across a range of disciplines, but the boat's large steel keel section is sitting in the middle of the shipbuilding hall at German Naval Yards in Kiel. From the stylish lines of the project's logo and the excited buzz around the hall, it is already clear that this yacht has been very carefully named. With her razor-thin shark-fin mast and gill-like superstructure detail, she will certainly turn heads. But for all that, this is a project for a very experienced owner and is as much about what goes inside the yacht.

“Black Shark is a concept superyacht,” says Evgeniy Kochman, founder of broker Imperial. “Our client was driven by the idea of giving birth to a vessel that would have the same style and energy as a shark. Powerful, aggressive and elegant were his keywords.”

The in-house design team at Nobiskrug, the renowned north German yard that built Sailing Yacht A, rose to the challenge. First contact with the owner was at the Monaco Yacht Show in September 2017; two months later a contract was signed. Imperial brought in Winch Design for the exterior and proposed Sinot Yacht Architecture & Design for the interior – a first for Kochman. “Sinot’s vision and ideas are really inspiring. We wanted Sander J Sinot and his team to be the creative fresh wind of the interior,” he explains. “This yacht will be special. She will have an absolutely stunning interior – unique.” A year of intensive design and specification work followed to eliminate any grey areas in the brief. This total clarity is something on which Imperial prides itself.

With eight cabins, a touch-and-go helipad, a spa pool on the foredeck and an open-air disco/cinema, the key features were locked down by autumn 2018. Steel-cutting could get under way, such that by early February, 80 tonnes of this work had been shaped and welded together into Black Shark’s keel segment. By the time the yacht is finished, there will be another 2,000 tonnes of steel hull and alloy superstructure to join it.

This work will be completed in Kiel before the bare hull is launched in early 2020. It will then be tugged up the Kiel Canal to Rendsburg, where Nobiskrug’s master craftspeople will await her. Here the detailed fit-out will take place before her final launch in 2021. It is an ambitious timetable, but one that Nobiskrug is confident it can keep. “These are challenges that Nobiskrug likes,” says MD Holger Kahl with a characteristic grin.

Andrew Winch’s exterior design team came to the project with a brief to turn Nobiskrug’s vision into something truly special. And as he puts it with a smile: “This is not a whale shark; this is a fast, fast design.” They went through various iterations, but the shark fin mast and large GRP gill features were quickly agreed. “With the name it was obvious,” Winch says. “We started with a straight hull, then lowered it aft to make it more aggressive. The reverse bow means she has maximum waterline length, and that’s important for a boat like this.” The shark’s fin will be strikingly lit at night, and the owner is considering a matt black hull.

Inside, Sinot has subtly worked with the shark theme, and the colour black, to great effect. “We took the texture of shark skin, enlarged it and made abstract patterns,” says Zlatko Imamovic, senior designer and project manager at Sinot. “You don’t necessarily recognise what it is.” In the same way, they studied the ripples created by a shark’s fin as it breaks the water’s surface and carved them into black granite flooring on the bridge deck. There is generous use of backlit white quartz, the natural triangular structure of which echoes the form of a shark’s tooth. “We are using cutting-edge yet proven production and 3D modelling techniques to create something unique,” Imamovic adds. Other subtleties include the use of dark ceilings below the waterline, switching to dark floors above it. Woods used include lacewood, dark Macassar and wenge with bronze rubbed into the open grain. Modern furniture reflects the theme, with more Macassar and bronze trimming.

Black Shark will be the second Nobiskrug superyacht built for an Imperial client. The Monaco-based brokerage house, which has acted for dozens of new-build yachts up to 86 metres LOA, is very clear that this yacht is special. “She will have the ‘wow’ factor, for sure,” says founder Evgeniy Kochman. “It’s the same if you were a diver: if you see a shark, you are just paralysed. You will have the same feeling.” Despite the wealth of superstar design talent involved, the client has remained at the heart of the process, according to Kochman. “The general shape of the yacht was already in the mind of our client. He had his idea, we helped him to get the closest possible to his dream.” The broker says it is all about the details of a contract, which took 18 months to hammer out. “Specifications can have lots of grey areas,” he explains. “That’s something we’ve learned to eliminate: everything is defined beforehand. I know this project will win a design prize.”

It is a tradition as old as shipbuilding itself: the keel-laying ceremony marks the official start of a vessel’s life and is said to bring her good luck. “It is a very important point of time for an owner, too,” says Nobiskrug MD Holger Kahl, “because they physically see their yacht for the first time.” For Black Shark, it provides an opportunity to thank the owner and pay tribute to the project designers, as well as to wish the boat good luck. “Black Shark is an impressive name, with great intimations of strength and respect,” Kahl adds.

After the speeches, a freshly-minted euro coin is placed in a wooden block supporting the keel section, which is raised by the yard’s iconic crane. Under the owner’s eyes, and those of Holger Kahl, designers Andrew Winch and Sander J Sinot, Nobiskrug’s youngest female apprentice, Fiona Diekert, hammers home the first nail. Then it is the owner’s turn, and so on, before the keel section is delicately lowered back on to its bearers. Black Shark’s owner also chose to put some items of personal value into a time capsule, which he then welded into the keel himself. “It is a mark of the owner’s exceptional involvement in this project,” says Kahl.