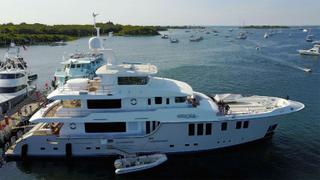 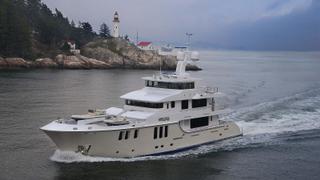 Built for a purpose: Inside the Nordhavn 120 Aurora

Since being sold to her current owners in February 2017, the 36.75 metre Nordhavn Aurora has clocked up 19,900 nautical miles in her predominant cruising grounds of Mexico and the west and east coasts of the US. This, her captain Jake Roush estimates, is roughly the equivalent of three quarters around the world, and a testament to the range and comfort of the Nordhavn 120.

The most memorable places Aurora has visited include the Sea of Cortez, or “the world’s aquarium,” Roush says, quoting the famous words of Jacques Cousteau. He recalls “the untouched richness of the reefs” and “astounding diversity in crystal clear waters”. Other gems have included small towns and anchorages in the Pacific North West, from Puget Sound to the San Juan Islands, and Roush hasn’t forgotten the “remote beauty of the blue Alaska glaciers.”

All of these adventures are thanks to the comfort, stability and range of Aurora, he says. “Undoubtedly our Nordhavn 120 has just begun to make her mark on the world and will continue her expeditions as far as the owner’s imagination will take her.”

It was Roush himself who was tasked with the job of finding Aurora when the time came to replace the incumbent Westport 112. Preferring to travel in company, the owner realised that “the 112 was not as much boat as he needed to make everyone comfortable,” Roush says. He tasked Roush with finding a replacement, but with a number of conditions. Interior space was key, he told him. A sky lounge, saloon, 10-person dining table, master cabin and at least two king guest cabins were key requirements.

While generous interior space was key, the owner did not want this to greatly increase the yacht's overall length, resulting in “an exorbitant amount of crew”, more operational expense and limited dockage availability. But when Roush first came across the Nordhavn 120 in autumn 2016 he realised he had found the answer. “From the first virtual walkthrough, I began to realise that this boat was a 50 metre in a 32 metre package,” he says.

Alongside the interior comfort designed by Destry Darr Interiors, seakeeping stability and a generous range necessary to fulfil the owners’ ambitious expeditions, Roush highlights Nordhavn’s ability to build fit-for-purpose yachts. “Nordhavn is a one-of-a-kind builder which engineers boats for the travel and comfort of its guests aboard,” he says. “Everywhere this boat goes, people stop and notice - not because it's like others but because it's built for a purpose.”