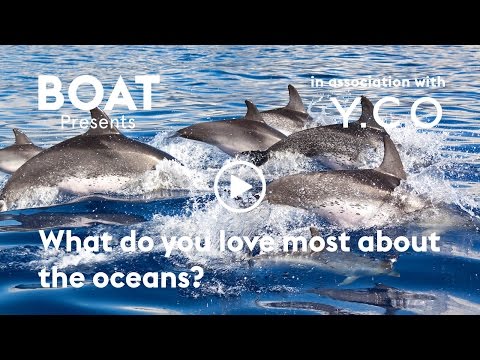 Video: What do you love most about the oceans?

Our partner Y.CO is an avid fan of the oceans and a staunch supporter of ocean conservation through its commitment to initiatives such as The Ocean Awards and an extensive CSR programme that has seen over €1.5M raised for charity. This philosophy is embodied by the company’s Yellow Way of Life, an attitude that celebrates the love of spending time on the water and putting others’ interests ahead of their own.

Everyone at Y.CO is passionate about the oceans, and so it seemed only natural that we asked six people at The Ocean Awards to tell us what they loved most about the oceans:

“There’s almost nothing I love more than being out on the ocean, on a boat or on a little island, and just looking for those little pockets of abundance that do still exist,” said Ben Goldsmith. As a fly fisher, Charles Clover also said he loves fish because he loves to catch them.

One of the themes in the answers was a love for the freedom the ocean gives us. Sir Ben Ainslie and wife Georgie Ainslie both passionately responded with this, as did Andrew Winch, who said, “the oceans give me a sense of security and calmness.”

This was supported by Nick Candy, who said: “The thing I love most about the oceans is the tranquillity and peace I get when I’m on a yacht, in the sea swimming, snorkelling and diving.”

This video is the second in a series, produced in partnership with Y.CO, bring ocean conservation to life. The first asked: “ what would you miss most if the oceans were destroyed?”