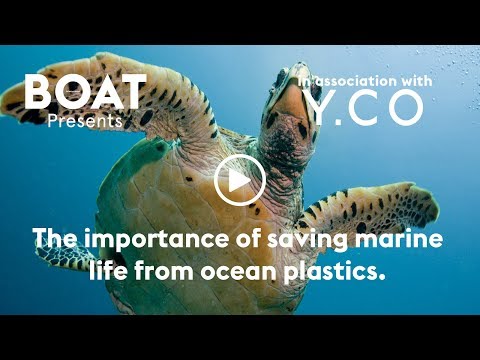 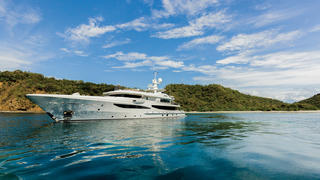 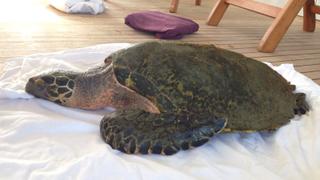 As more than eight million tonnes of plastic makes its way into the oceans every year, Y.CO’s Clearwater initiative is highlighting the importance of ocean conservation within the yachting industry and how crucial it is to protect the oceans for future generations.

In the latest in the Clearwater series showcasing the importance of plastic awareness, Boat International meets with Natalya Scudder at the Monaco Yacht Show 2017, who shares her experience of realising how single-use plastics can have a huge impact on the environment. Scudder is a stewardess on board 55 metre Step One, which is available for charter with Y.CO.

“Last year when we were based in Costa Rica we had an incident where there was a turtle floating next to the yacht,” she explains. “It was just floating on the surface of the water so we decided to pull it out and we called the vet. It turns out that the turtle had swallowed a plastic bag,” she adds.

More than 300 tonnes of new plastics are used every year, half of which is single-use. Annually, approximately 500 billion plastic bags are used worldwide, each of which is said to have a ‘working life’ of just 15 minutes. Plastic has become seemingly intrinsic to our modern way of life and avoiding it is near impossible. Globally, more plastic has been produced in the last ten years than throughout the whole of the last century.

It took a whole year to treat the turtle and unfortunately, his story is not uncommon – many turtles not as lucky as the one saved by the Step One crew are found with their intestines full of plastic. Plastic bags floating in the water are easily mistaken for jellyfish, a popular meal among turtles. It is estimated that more than 100 million marine animals and birds are killed each year due to entanglement or consumption.

According to a report by Plastic Oceans, a charity working closely with Y.CO, there is more plastic in open oceans than plankton and it is getting eaten by a huge variety of marine life. The report, which was written by Dr Geoff Brighty, Jo Ruxton and David Jones, says: “Intake of plastics into loggerhead turtles in the Indian Ocean between Mauritius and Madagascar included rope, line, polystyrene, hard and soft plastic, and plastic caps – 51.4% of the turtles had ingested marine debris, the majority of which was plastic (96.2%). This was the highest number, weight and volume per turtle reported to date.”

“That’s when I realised the impact that we have on the ocean. It was horrible and it made us realise that we need to make a difference,” Scudder says.

This is a global issue and there are plenty of ways to help. In a speech to captains and crew at Monaco Yacht Show, Clearwater spokeswoman Emily Penn said: “It can be very slow and difficult to make changes to national legislation. But on board a yacht [captains] are the law. You make up the rules and you have the power to change things for the better.”

Y.CO has announced that yachts and crew who offer outstanding contributions to charity or ocean conservation will be recognised through official accreditation. Additionally, Y.CO captains can nominate crew-members as "plastic heroes" when contributing to ocean conservation and plastic awareness.