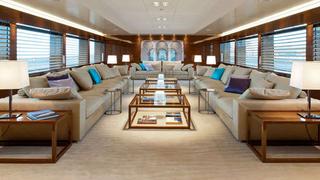 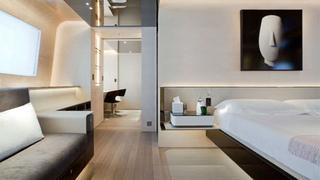 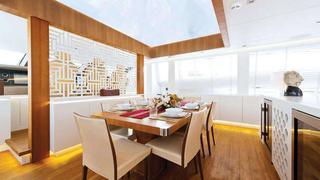 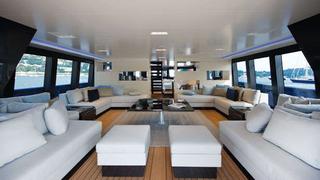 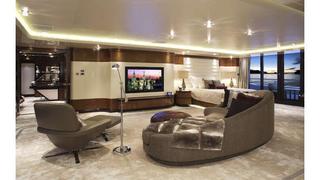 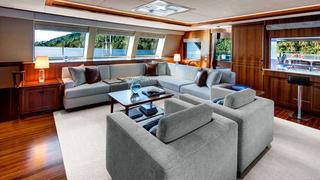 The 2013 ShowBoats design awards celebrate the top designs and designers of superyachts delivered in 2012. The Interior Design and Interior Layout awards prove that it’s what’s inside that counts. Here we present the winners.

Adding to the dilemma confronting the jury in this category were the vastly large tonnages this group represents and the amount of interior spaces they had to compare. Two of the finalists were conceived for charter, two glorify nature and outdoor living in very different ways and two were unusual in the access they offer their guests to the sea. Although all interior design categories contain a rating for elegance and visual impact, it was here that the group divided on interpretations of elegance, with nearly each finalist claiming a champion or two. Based on visual impact and appearance alone, the yachts were too closely bunched to call. Scores for supporting role categories of functionality and practicality at sea were where 77m Hanseatic Marine-built Smeralda pushed to the top of the class, displaying a design that was best thought out, furnished and finished to match her function as a high-speed passage maker. Interestingly, the next three finishers were tightly grouped and only separated by a point.

This category was dominated by extensively customised semi-production yachts for owners of vastly different tastes. Interestingly, the top vote-getters were those yachts belonging to owners who hands-down have the most experience, not just in this category, but in the entire list of nominees in this year’s awards. Also of note is the fact that the yachts emerging at the top are true family yachts designed for multi-generational use. In the final analysis, while elements of functionality and innovation were a toss-up, Rossinavi’s 45m_ Aslec 4 edged out Heesen Yachts 47m _Lady Petra, winning the jury’s hearts for her seamlessly flowing spaces and the molded, integrated appeal of her interior joinery designed by Rémi Tessier. One of the judges described her visual impact as ‘sexy’ while another said the flowing surfaces just begged to be touched.

The judges attacked this category with gusto, and with consternation, as they tried to find equivalent benchmarks to grade smaller fast yachts against a pair of the largest semi-displacement yachts afloat from U.S. builder Trinity Yachts, and compare custom yachts against series boats. It was clear that they were impressed with clean lines, a simple, color palette and functional furniture on a yacht they described as ‘small but nice.’ The winner was 35.36m AB Yachts Diamond whose crisp interior was judged to match her performance. It is to Guido de Groot’s credit that his décor survived a change of the yacht’s ownership mid-build with little more than a swap of sofa selections. Interestingly, Tsumat, at 49.99m, placed second in the voting, which should be seen as a mark of achievement to her Mexican interior architect Ramon Alonso of Loguer Design, working on his first new-build yacht project.

The finalists presented to the jury by the senior editorial team of Boat International Media’s magazines are each the top of their type, and as such these eight yachts show the diversity of sailing yachts and the dreams of their owners. Each was judged to match the design brief. The jury expended much effort evaluating the designs for innovation, functionality and practicality at sea before arguing visual impact. With a striking lighting plan, a dramatic owner’s suite and a low-maintenance interior that transforms cleverly for different functions and different times of day, the judges scored the ultra-modern 50.5m Wally Better Place in first place. Lest you think the judges were solely moved by avant-garde shapes and finishes, their runner up in this voting was the comfortable and somewhat traditional appeal of the catamaran Quintessential.

The road to winning an interior layout award begins with impressing a skilled subcommittee on a variety of logical topics and a few very specialised points such as indoor/outdoor access, appropriateness of space allocation, stowage and the crew and guest circulation plans. Three yachts rose to the top of the list of 10 finalists for presentation to the full panel of judges: Arianna, Mogambo and Vicky. While all three had smart general arrangements, the fact that Vicky offers her guests three destinations — the spa, the salon atrium and large pool on the sun deck — won them over. The judges noted that the diversity made this 72.6m Proteksan-Turquoise yacht live like a 90m, and they appreciated how the private terraces of the master suite can be used while the boat is underway.

Beginning with an owner’s concept for a ‘large beach cat with cabins,’ the design progressed as the owner refined his ideas to include ocean passage-making and the possibility of charter, which brought in MC LY2 requirements, into a travelling beach house. The cornerstone of success for Yachting Developments’ 30.49m Quintessential is its simplicity. The space planning as well as the ease with which even land lubbers can navigate the hulls and main deck spaces is a large part of the yacht’s success. The generosity of communal spaces while preserving sightlines and the exterior profile sets this yacht apart, while the master stateroom, with its 270-degree views, sets a new standard for what can be achieved on a yacht of modest size.