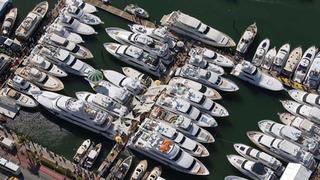 The Miami Yacht & Brokerage Show, as the first large on-water display of the year, always acts as a foretaste of the months to come and, as usual, we present our informal straw poll of some of the leading participants.

Firstly, Hein Velema, CEO of Fraser Yachts says, ‘The entire atmosphere in the USA is much more positive than last year and we had our best Miami show since 2007. Three of the five yachts we had on display had repeat visitors expressing keen interest. All in all, the mood is far better than in Europe and we’re selling more charters and boats in the States. Even though she wasn’t officially part of the show, our 73.15m superyacht Laurel, moored nearby, attracted a great deal of attention.’

Comments Kevin Merrigan at Northrop & Johnson: ‘It was a good show for us as two of the seven boats we had in the show went under offer. We expect several offers on the other girls too. I think this is going to be a stunning year in the brokerage market, followed quickly by new construction.’

And now over to Bob Saxon, President of International Yacht Collection: ‘In summary the show was very good for IYC. We have one yacht under contract and offers pending on three others. All are within reach. Charter activity was brisk which could be an indication that the customers are starting to re-emerge consistent with the modest recovery of the US economy, which seems to gaining some momentum. Overall I’d say the show provided a positive indication and we look forward to sustaining that energy for the Palm Beach Boat Show one month hence.’

And finally, back to Europe with Maarten Ten Holter at Vripack. ‘We noticed less traffic than in previous years but feel that things are picking up. Prices are still low but there are more transactions so it’s still very much a buyer’s market and will remain so for the next couple of years.’

So that’s it folks, four very positive views from the first major brokerage show of the year.