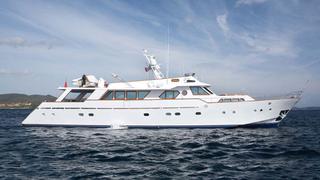 Mark Duncan at Yachting Partners International sends details of the five yachts the company is bringing to the Cannes Yacht Show from September 11-16th.

Firstly, there’s Benetti’s 29.75m motor yacht Salve, recently reduced to €1.75 million. Built in 1974, she was returned to her original excellent condition during a year-long refit in 2007/2008 and is now seriously for sale by an owner who’s moving up to a larger yacht. Working with a crew of five, she is RINA compliant, accommodates up to 10 guests comfortably and cruises at a stately 13 knots.

Then there’s a joint listing with North Star Yachting: Mirage is a new generation Baia 100 built in 2010 to RINA class. She’s one of the fastest luxury yachts in the world, with speeds of up to 50 knots, powered by triple 2430hp MTU engines. Accommodating up to 10 guests in two double and two twin cabins, Mirage has a unique glass covered enclosure over the saloon that continues onto the open deck space and she’s asking €5.7 million.

The 34m motor yacht Lady Maria is part of Ferretti’s ever popular 112 series. She was built in 2007 and has been constantly upgraded since new. She sleeps 12 guests in five double staterooms, all with en suite bathrooms. The master stateroom is on the main deck with 2 doubles and 2 twins with Pullmans on the lower deck. Her interior is finished in satin varnished dark wood with cream leather and carpets throughout. Marble floors and counters in the bathrooms add to the overall sense of luxury and attention to detail that pervades throughout the yacht. Lady Maria is asking €6.3 million.

The 43.59m motor yacht Antinea was built by Nishii Zosen in 1985 and refitted in 1991, 2001 and 2008. ABS classed and MCA compliant, she accommodates 12 guests in a master, four doubles and a twin cabin and cruises at 12.5 knots. Following a price reduction earlier this year, she’s now asking €5.9 million.

Finally, there’s the sporty 24.4m motor yacht IFA Cannes. She was built in 2007 to RINA class by FIPA Italiana as one of the popular Maiora 27 range. Accommodation is for up to 10 guests in four staterooms and she has a spacious interior in light, warm bamboo. She is in excellent condition, the owner having made considerable investments in deck work, interior refinishing, new exhausts, paintwork, 1000-hour engine service and so on. IFA Cannes is MCA certified and her 5-year survey has been completed. The asking price is €2.2 million.