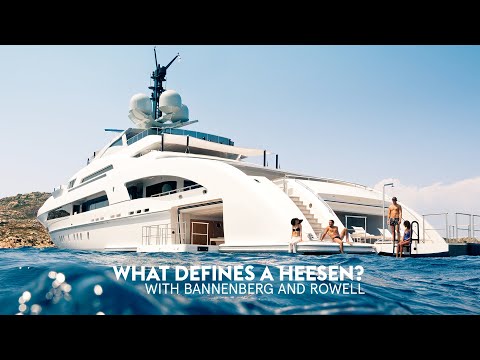 Designer Dickie Bannenberg on What Makes a Heesen?

When Frans Heesen purchased a shipyard in Oss, the Netherlands, he set out on a mission to create yachts that pushed the boundaries of design – a mission that still stands four decades later. Since its inception in 1976, Heesen have launched over 170 yachts and to this day are considered a world leader in the design and construction of the finest oceangoing aluminium superyachts. But what make a boat quintessentially ‘Heesen’? Is it world-class craftmanship? Sporty lines or performance?

In this new series we sit down with some of the world’s most revered superyacht designers to chat about their favourite Heesen designs and the key facets that make up the shipyard’s award-winning formula for boatbuilding. In the first instalment, BOAT International chats with Dickie Bannenberg, of British design studio Bannenberg & Rowell.

When it comes to the partnership between Heesen and Bannenberg & Rowell, it’s easier to measure in boats than years, says Dickie Bannenberg. “Ten to be exact”.

The two first joined forces in 2006 on a 47 metre Heesen named Elandess II (now known as Naseem). It was an important milestone marking the beginning of the design duo that went on to work on boats from the 47 metre Book Ends and My Secret, to the 65 metre multi award-winning Galactica Star.

“For us Galactica Star is the epitome of a Heesen” says Bannenberg. “She is a sporty and dynamic looking yacht, so we had to create an interior that complimented it in an equally dynamic and sporty sense. We were able to come up with a concept that was lightweight but very alive and taut. And all those things came together exceptionally well.”

And he’s not wrong. Since her launch in 2013, Galactica Star has picked up 10 awards for her exceptional design, both inside and out, and even scooped a coveted Neptune at the World Superyacht Awards in 2014.

"We’re always struck by Heesen's hands-on and can-do approach to all their projects", he added. "To have all their build slots full and be flexible enough to take on some fully custom projects on top of their on-spec builds is impressive".

"Frank Laupman at Omega Architects has done a great job of giving Heesen yachts a coherent exterior design and you can see how it's evolved to be sharper and unmistakably more contemporary".

Currently under construction in Oss are two 55 metre sisterships, Project Castor and Project Pollux, both of which are a collaboration between Heesen and Bannenberg & Rowell. The pair are due to be delivered two or three months apart in late spring/early summer 2020. “They are similar with almost identical layouts, but in terms of finish and feel they are very different. We’re looking forward to seeing those next year.” As are we.

In parternship with Heesen Yachts