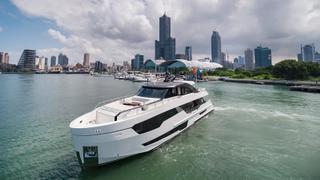 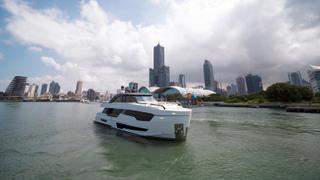 Inside the Ocean Alexander 90R ahead of its worldwide debut

With 1,500 boats on display, the 59th Fort Lauderdale International Boat Show is shaping up to be an unmissable event. But there is one yacht in particular everyone is waiting to see.

The first yacht in Ocean Alexander’s Revolution series, the OA 90R, is set to receive its anticipated worldwide debut. Even Ocean Alexander admits the 27 metre, three decked 90R is “a yacht unlike anything we’ve ever built” while designer Evan K Marshall described it as a “departure for the yard.” “If we tried to do this five years ago, it would have been too much of a shock,” he said. But its bold design by Marshall has handed the yard a brand new, explosive style and sent it in a new direction.

Marshall admitted the yacht provided his design office with “one of our most exciting and rewarding challenges to date,” resulting in a yacht populated with standout design features. These include the extensive glass glazing across all three decks and an open plan skylounge. Guests will arrive on board via a large swimming platform and admire the yacht’s unique glass fronted superyacht beach club, which is accessed via sliding curved doors. Marshall highlights this feature as “a destination space.” On the deck above meanwhile, a shaded cockpit offers an ideal spot for a light meal or cocktail. The highly sociable layout extends inside. The main dining area seats up to eight while sliding wall panels allow for the galley to be concealed when needed.

Meanwhile the full beam main deck creates a spacious master cabin, which is situated forward and offers stunning views out to sea through floor to ceiling windows. A VIP cabin and two twins sit on the lower deck, taking the total accommodation to eight guests. However, an alternative layout is also available, which can accommodate a total of 10 guests. Marshall described the OA90R as a “penthouse” in which he has created a “completely new design language”. He added: “We are confident that this new bold design direction for Ocean Alexander will be met with the more success and will continue to expand the appeal of Ocean Alexander yachts internationally.”

_The first Ocean Alexander 90R will be located at slip 620 on the main F-Dock in the Bahia Mari area at the Fort Lauderdale International Boat Show from October 31- November 4. _