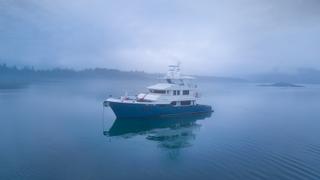 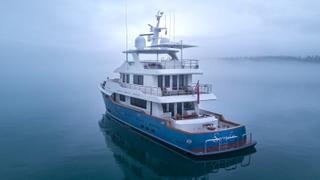 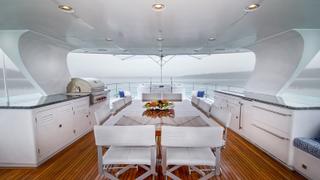 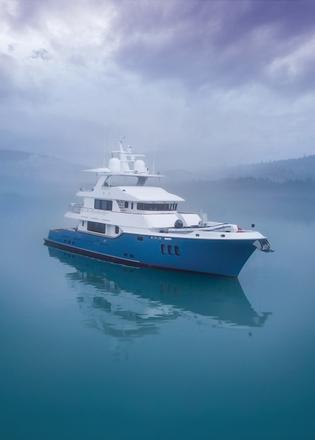 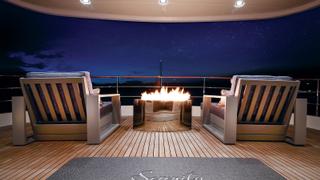 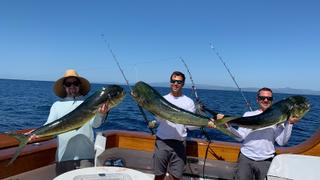 Made to measure: Inside the first Nordhavn 100 Serenity

Despite being billed as a Nordhavn 96, the 30.48 metre Serenity departed Nordhavn’s Xiamen yard rebranded as the very first Nordhavn 100. Like many Nordhavn owners Serenity’s had been drawn to the US yard for its willingness to adapt and customise to their clients’ wishes. For him, this meant a number of extensions to the original Nordhavn 96 aft design.

The customised wish list included an elongated transom and swim step that eventually extended the yacht’s length by 36 inches. As a keen sportsfisherman, the owner also asked for a bigger cockpit kitted out with all the latest gadgets and gear to aid his passion. Last but not least, he requested a colourful hull finish in “Stars and Stripes blue”.

While sporting a noticeably longer stern, Serenity retains the unmistakable Nordhavn DNA, with a bulbous bow and high freeboard that makes her ideal for tackling rough seas. In this regard, Serenity has already proved her mettle. After taking delivery in Ensenada, Serenity departed on a shakedown cruise through the sea of Cortez to Mexico. After that, she headed north to reach British Colombia and Alaska before heading south again to Costa Rica, where she remains today. Captain Zach Gallagher revealed that in that time Serenity has already met her fair share of hairy situations.

“We’ve put the boat through some tough weather and conditions, especially sitting exposed in Alaska for two months,” Gallagher said. “Some of the sea conditions saw us take green water over the bow and the boat handled it very well. I was very surprised.”

As for the customisations, Gallagher is happy to report his boss’s delight and complimented Nordhavn’s flexibility when it came to altering the design. “He absolutely adores that cockpit – it came out pristine, exactly how he imagined it. He and Nordhavn worked very closely on it and Nordhavn took his ideas and brought them to life,” Gallagher said.

As well as being extended, the cockpit is packed with “a whole slew of appliances and devices to aid fishing,” Gallagher said. These include two kill boxes, each with their own ice makers producing 600 pounds of ice a day. There are also four live wells; two portable and two built-in and “one massive freezer.” Serenity’s kitted out cockpit results in a smooth fishing operation on board. “Everything is dealt with inside the cockpit,” Gallagher said. “It’s got a good flow to it.”

With her owner recently joining the boat in Costa Rica, Serenity is now facing a long-range cruising itinerary where he plans to take in all the best fishing hotspots in Central America, the Galapagos and eventually the French Polynesian islands on the way to New Zealand and Australia.