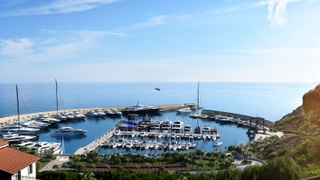 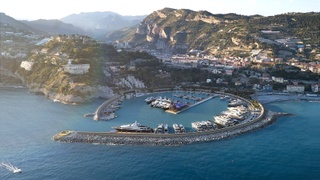 New marina near Monaco for yachts up to 70m nears completion

Works to complete the new Cala del Forte marina in Ventimiglia are on schedule, and due to be completed by the end of December, the owners say.

Following stalled construction, the marina was bought in 2016 by Monaco Ports, which manages the ports of Hercule and Fontvielle, as well as the new floating breakwater, in the principality. Ventimiglia is on the Italian/French border but is less than eight miles from Monaco.

When finished, the circular Cala del Forte will have capacity for 178 yachts and superyachts of up to 70 metres LOA. It is expected to help with the ever-increasing demand for berths in and near Monaco, which often runs at saturation point. Service levels will be to the same standard as those offered at the Monaco ports.

The three jetties have been built: the main central jetty (Molo d’Onore), the outer jetty, and Pontile B. All bollards are on site and are currently being installed and the preparation of the underwater mooring infrastructure is currently under way. The foundations of the central harbourmaster office have been laid and work on the building on the central jetty is due to finish by December 31.

The 2,700 square metre shipyard is being built at the moment. The piers and lifting basin have been completed, ready to accommodate a travel-lift capable of hoisting yachts up to 30 metres.

The fuel distribution dock is in place and four tanks (with a total fuel capacity of 150,000 litres) have been installed inside bunker/isolation tanks. Dredging and levelling to depths of 4.5 to six metres inside the marina is under way.

In February, the Italian authorities granted permission for the latest development plan for the marina, which ensures plenty of space for manoeuvring, a larger dry dock and shipyard area and an alongside berth for a 70 metre yacht. A limited number of berths are available for sale on the basis of a long-term (40-year) leases.

The development includes two shopping areas, totalling 39 shops, with underground car parks. The eastern shopping and parking area is already 95 per cent complete and the west 25 per cent, and both are due to be finished by the year’s end.

All of the structural and civil works have been contracted and works relating to architectural and landscaping design have been tendered. Improvement works to the adjoining road, Lungomare Marconi, are also well under way.