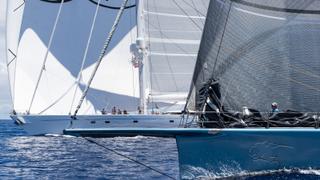 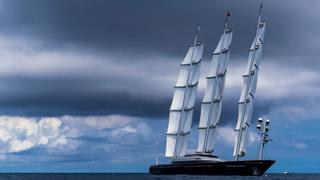 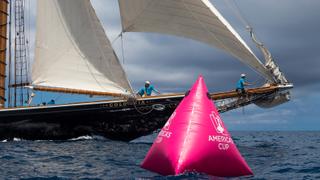 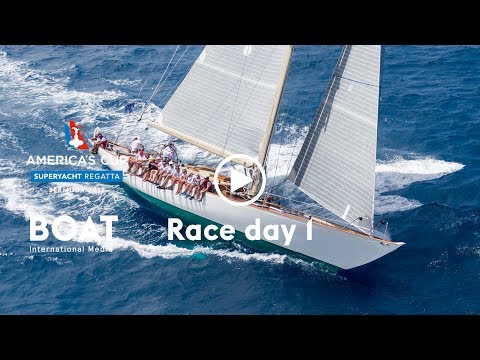 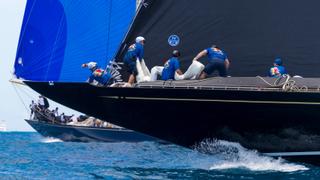 If the turquoise waters off Bermuda’s north coast offered a gentle, benign start to the America’s Cup Superyacht Regatta 2017 there were few complaints from the 19 crews who enjoyed a relatively straightforward Race Day One, in association with Rego Sotheby’s International Realty, a coastal round the buoys passage contest of between 13 and 16 miles.

In breezes which rose and fell between 5 and 11kts there was little by way of tactical upwind or downwind sailing and so the keys to success were sail selection, trimming, smooth crew work and reading how the cloud patterns were influencing the patchy, shifty winds as they blew down off the island.

In the competitive five strong J Class fleet, racing in association with Bermuda Business Development Agency, Hanuman came back from a premature start to recover quickly and take the race victory ahead of Ranger. The biggest Superyacht in the fleet, the iconic 88m Maltese Falcon scored the biggest win in the regatta’s biggest division Class C. 44.8m Visione, the Reichel Pugh design laid down a marker by winning Class A, Hyperion the 48m Frers design with Harold Cudmore calling tactics, triumphed in Class B.

The triangle shaped courses (to be expected in Bermuda?), passing Kitchen Shoals, placed the biggest premium on reaching speeds. The first reach which became progressively broader saw a variety of reaching sails set but there was a seemingly high proportion of two sail reaching, opening up few passing opportunities.

The J Class fleet started first. Hanuman were a little too eager on the start and nudged over the line by Topaz, making them just seconds early. The wind pressure was building from the right flank of the first upwind and the Hanuman afterguard were able to engineer a smart bounce back, choosing the right side along with Velsheda and Topaz.

At the first windward mark Velsheda came in with pace and were able to just round ahead of Hanuman. Setting a spinnaker cost Velsheda initially, ceding the lead to Hanuman who set a reaching sail later on the leg and were able to ease away.

The final short beat was as fickle as the first upwind. Ranger came through strongly to steal second.

“We recovered pretty well after that start, all things considered,” explained Simon Fisher, Volvo Ocean Race winning navigator sailing as strategist on Hanuman which is steered by Ken Read. “The racing was dominated by the clouds which were coming off Bermuda. Despite being a little bit early on the line, being pushed a bit by Topaz, we came back nicely, got on the right side of the wind shift and were right back into it quickly.”

Sail selection and use was key in Class A where Visione triumphed, as boat captain Garth Brewer recalled: “We sailed pretty well, the crew work was good all the way through. We made an important peel from the A1 to a reacher and that kept us fast on the first downwind. It was nice and clean. But the boat is well set up. We made the right sail choices at the right time.”

The same key factors were fundamental to Hyperion’s win, holding on to their spinnaker when the reaches got tight. Hyperion, with veteran Cudmore aboard, sailed smoothly to hold off Action which has Shirley Robertson and Ian Walker as a formidable afterguard along with navigator Marcel van Trieste.

Daniel Rawlins, captain of Hyperion, explained: “A lot of our success today is down to us not having to drop our kite on the downwind leg. We sailed into a nice puff of breeze then and managed to extend away. Others had to douse and reset and we held on and that made the difference. That was big gain. And then on the last leg to the finish line we did on one tack and so that all helped.”

The remarkable livewire Loick Peyron found a temporary salve to any disappointment that his Artemis Racing team did not manage to progress to the America’s Cup Match, falling 5-2 to Emirates Team New Zealand. The past Jules Verne Trophy round the world record setting skipper and winner of the last Route du Rhum solo transatlantic race, is steering the Farr designed 35m Sojana, this week.