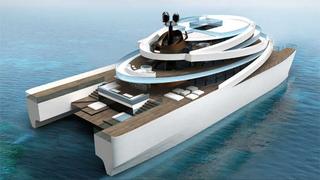 Dutch superyacht builder Oceanco will once again sponsor the Young Designer of the Year Award, presented by Boat International Media during the ShowBoats Design Awards in 2015.

The Young Designer of the Year Award competition seeks to recognise emerging talent in the superyacht design industry. The awards celebrates the original concepts of student and trainee designers from around the globe, tasking young designers with a realistic client request to challenge their ideas, technical ability and aptitude for delivery. The brief is set to provide valuable and authentic insight into the reality of working as a designer within the superyacht industry.

For the last few years, competitors are given a real brief to design to. 2014's entrants were asked to design a superyacht based on a 60m SWATH (Small Waterplane Area Twin Hull) hull (as seen above). This year’s Young Designer of the Year Award task is quite a departure, providing aspiring yacht designers with an initial concept drawing for a 55-metre sailing yacht, which they are challenged to expand into a fully thought-out design including the design of the deckhouse (or deckhouses) and a complete general arrangement plan for the cockpits and all enclosed spaces.

Presented at the ShowBoats Design Awards, which will take place on 23 February 2015 during the Superyacht Design Symposium, the winner of the Young Designer of the Year award will be presented with a gold Neptune trophy and a €5,000 cash prize. All five finalists, chosen by a jury drawn from the ranks of the most highly regarded naval architects and yacht designers, are invited to attend the awards and will benefit from a host of incredible opportunities aimed at advancing their early design careers. They will receive complimentary access to the 2015 edition of the Superyacht Design Symposium and an all-expenses paid visit to Oceanco’s shipyard in The Netherlands.