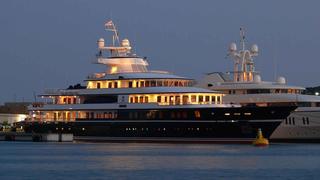 Leander G Superyacht Back on the Market

Sold in February 2016, the 74.98 metre motor yacht Leander G is back on the market, listed for sale by Nicholas Edmiston at Edmiston & Company.

Delivered in January 1992, the yacht was formerly owned by the late Vice Admiral Sir Donald Gosling KCVO RNR for two decades. Built in steel and aluminium by the German yard Peene Werft on the Baltic Sea, she was built under the supervision of Claus Kusch. An English country home style interior by Pauline Nunns accommodates as many as 20 guests in 10 cabins consisting of a master suite, VIP suite, three doubles and five twins, all with en suite bathroom facilities.

Leander G was acknowledged as one of the great yachts of the 20th century and over the past 20 years she cruised throughout the Mediterranean, Northern Europe and to every point in the Caribbean Sea.

Lloyds classed and MCA compliant, she hosted Queen Elizabeth II and Prince Philip on a tour of Great Britain and HRH Prince Charles and The Duchess of Cornwall in the Caribbean, carrying out the informal role of royal yacht to senior members of the royal family on official tours.

Over €25 million has been invested in her upkeep under her current ownership, including considerable upgrades to guest, crew and mechanical systems and a full repaint carried out in 2018. Her top speed is 18.5 knots and she boasts a maximum cruising range of 8,000 nautical miles at 14.5 knots with power coming from two 3,600hp Deutz-MWM SBV12M628 diesel engines.