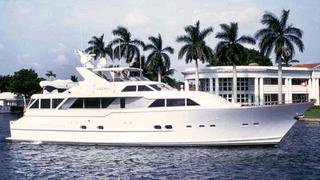 Good news from Northrop & Johnson that Chris Chumley has sold the the 25.3m motor yacht Limerick to a direct client.

Built by US shipyard Burger, Limerick was launched in 1990 and refitted in 2007. The refit included a rebuild of the starboard engine and an overhaul of the port engine. In addition, she received a new paint job and upgrades to her appliances and air conditioning system. Limerick has great volume for her length, including accommodation for six guests in three luxurious staterooms, each with en suite bathrooms and entertainment centers. Twin 1,080hp GM engines give her a cruising speed of 16 knots and a maximum speed of 20 knots. Other features include a large aft deck and spacious flybridge – both ideal areas for al fresco entertaining.