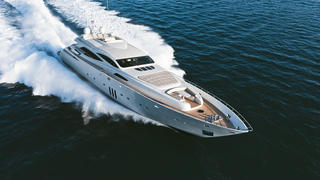 Designed by Fulvio De Simoni, Kuikila was built in GRP by Italian yard Pershing to RINA class and was delivered in 2011 with a refit in 2015. Still under her original ownership, she accommodates up to 10 guests in four cabins consisting of a ful beam master suite, VIP suite and two twins, both with Pullman berths. All cabins have entertainment centres, television screens and en suite bathroom facilities. In addition, there are quarters for five crew in three cabins.

The open plan full beam saloon has cream cloured crescent shaped settees to port and starboard, a bar and an entertainent centre including a 65 inch television screen on a rise and fall mechanism. Forward is a dining area seating eight guests just behind the helm position with three chairs. Further forward below deck is a private cinema that doubles as a children’s playroom.

The aft deck of this yacht for sale is ideal for al freasco dining, equipped with built in upholstered seating, a table, settee and a 42 inch waterproof television screen. Up on the flybridge, amenities include four lounge chairs, sun pads and a bar and seating beneath a removable sun shade.

As comfortable as she is, Kuikila was really built for speed to whizz her guests around the Mediterranean hot spots. To this end, twin 3,649hp MTU engines and a Vector gas turbine are linked to triple KaMeWa water jets, powering her to speeds of up to 52 knots.