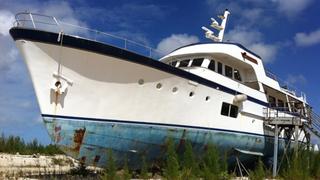 The classic 26.21 metre canoe-sterned motor yacht City has been listed for sale by Alex G. Clarke at Denison Superyachts.

Built in steel and aluminium by Dutch yard Feadship to a design by De Voogt Naval Architects, she was delivered in 1960 to an American owner originally named Exact. Accommodation is laid out for eight guests in four cabins consisting of a master suite, two doubles and a twin and she is powered by twin 375hp Detroit Diesel engines.

However, the past 60 years have taken their toll and City needs a complete rebuild. Alex Clarke estimates that transportation costs back to the Feadship yard would be €120,000 and the cost of a full restoration would be between €3.5 million and €5 million.