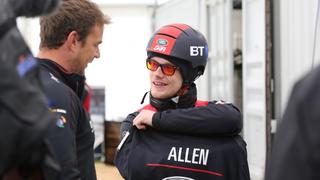 The America’s Cup is often celebrated for bringing the thrill of sailing to a global audience and nowhere is this better seen than in the three diverse celebrities who joined Land Rover BAR as the team’s sixth man in New York this weekend (May 6-8).

British actor Alfie Allen, American star Mark Ruffalo and Australian actor Liam Hemsworth all joined Britain’s America’s Cup hopefuls for the Louis Vuitton America’s Cup World Series on the Hudson River. Each of the celebrities took a turn on Land Rover BAR’s AC45 race boat and spoke about how much they enjoyed the experience as sailing newcomers.

First up was Games of Thrones star Alfie Allen who visited Land Rover BAR during warm-up day on May 6 to take part in a race against defending champions Oracle Team USA.

Allen, who was educated in Portsmouth, England, the home of Land Rover BAR’s headquarters, experienced the thrill of the foiling catamaran from the stern, saying, “It’s still sinking in really that I’m here with this amazing team – Ben’s a legend! I’ll be honest I’m not an avid sailor but being [the] ‘sixth man’ is a once in a lifetime opportunity. It’s incredible watching how the team and the boat operate on the water."

Next up was The Hunger Games actor Liam Hemsworth who said that watching the team working together on board was “one of the most incredible things” he’d ever seen.

Hemsworth, who also joined the team on practice day and can be seen in action above, admitted to having very limited sailing knowledge. He explained, “It feels like another world. I have so much more respect for what they do, it’s incredible to watch them work – it’s kind of emasculating!”

Ruffalo praised the America's Cup sailors for their understanding and appreciation of the need for greater marine sustainability, saying, “They understand that the health of their sport is in many ways connected to the health of our planet. A big conversation we had on the boat was about what we can do to accelerate these changes and how much it means to them.”

Despite losing out to Emirates Team New Zealand, who took a surprise win with a leaking hull on Sunday’s final race day, there’s no doubt these celebrity sailors added even more excitement to proceedings with Land Rover BAR wing trimmer Paul Campbell-James commenting that they were “some of the best guests we’ve ever had on board”.