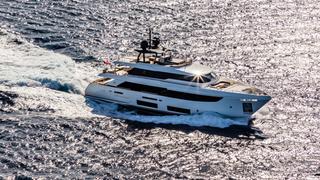 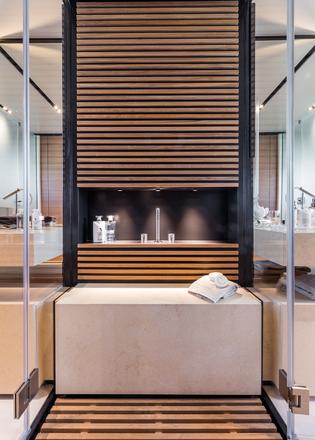 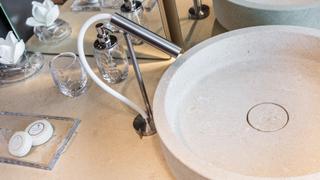 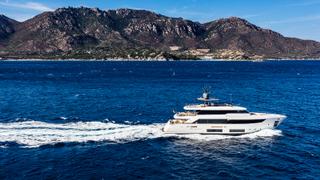 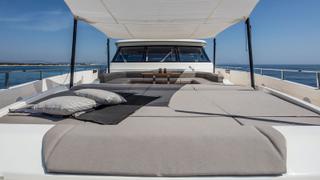 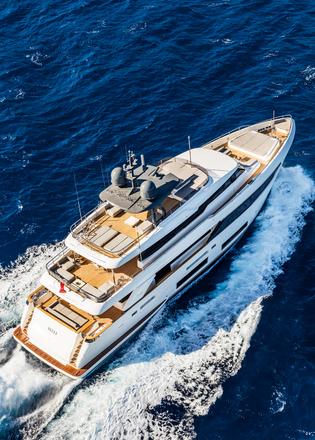 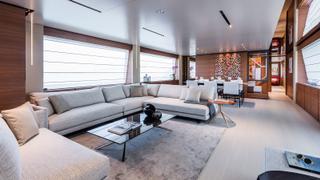 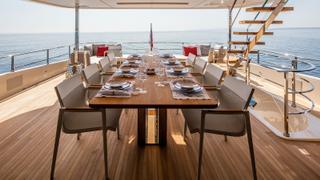 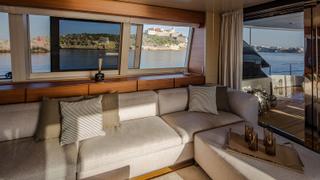 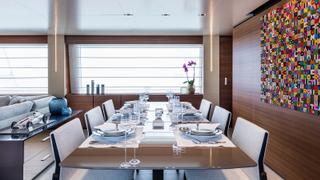 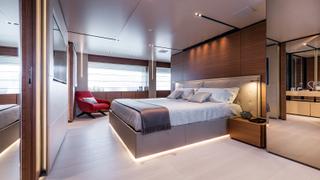 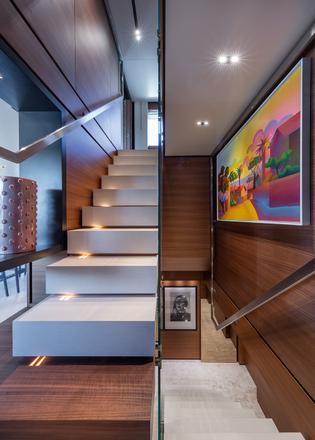 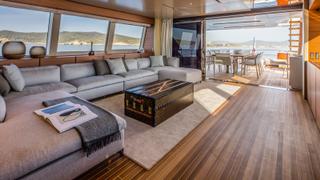 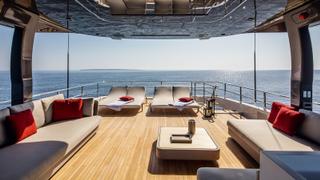 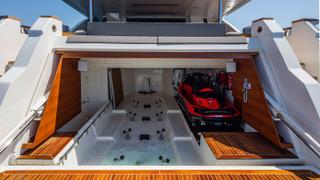 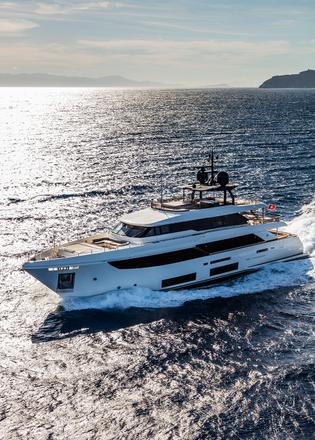 It’s summer on the white isle of Ibiza, and the air is as thick with anticipation as it is with heat. A hand-picked audience of Ferretti Group yacht owners and guests gather at Lío Ibiza but their eyes are not on the cabaret show. Out in the black of night, just beyond the club’s seafront terrace, the main act is ready. Lights blaze, music roars and the new 33 metre Ferretti Custom Line Navetta 33, Telli, is revealed in all her glory, with sequin-clad dancers spinning along the side decks.

It’s a grand entrance for a yacht that is all about simplicity and understated elegance. The first semi-custom Navetta 33 is not an overwrought showpiece, but a highly considered, well balanced yacht designed to the precise brief of her discerning owner — Ferretti Group’s CEO Alberto Galassi, who is not only the head of a shipyard but an experienced yacht owner as well.

Galassi’s last boat was this one’s predecessor — the Navetta Crescendo 33, which was launched in 2010 and yielded more than a dozen yachts. The Navetta 33 is not a mere refresh; she’s a totally new offering, redesigned from the hull up to the wide-body superstructure and everything in between.

“The brief [for the Navetta 33] was to improve upon every detail of the Navetta Crescendo 33,” Galassi says. “I had spent three seasons on her, so I understood what we had to do. I wanted us to make a giant leap forward, to set a new benchmark.”

Outdoing what came before translated to improving stabilisation, sound dampening and audio-visual systems, as well as creating a layout that encouraged better traffic flow and a connection with the outdoors.

As the start of a new semi-custom series, the aim was to create a yacht that would appeal to Ferretti Group owners, packing as much comfort, style, volume and as many high-tech systems as possible into a 33 metre. Thankfully the result doesn’t feel forced. Step on board and the initial impression is simplicity and space: wide interior living spaces with long sightlines, plentiful windows and a contemporary but inviting décor.

Regular Ferretti Group collaborator Zuccon International Project designed the exterior, while the naval architecture and interiors came from Ferretti Group’s in-house team, which was expanded just for this project. Galassi notes that a great deal of investment was poured into R&D for the Navetta 33, which spent about two years in the design and development stages.

“We hired a lot of people from the automotive and aerospace industries, as they are well ahead in terms of soundproofing and automation,” says Galassi. This expertise was put to work to make the Navetta 33 exceptionally quiet and vibration free: on a wander down to the lower deck cabins while underway, Telli is so quiet that it seems impossible that we are moving at cruising speed.

Ferretti Group’s engineering department began advanced sound dampening studies on the Custom Line Navetta 37, launched last year, which it carried over into the 33. Specially designed materials were used to impede sound: a floating base underneath the parquet reduces noise from the engine room to the decks and living quarters, as well as footstep noise from upper levels.

Zuccon created a contemporary exterior for the new Navetta 33. “In previous Navettas, the superstructure was dominant on the hull with the traditional walkaround concept,” says Bernardo Zuccon. As Zuccon describes it, a wide superstructure is more pleasing to the eye, rising gracefully from the hull. Not only are both the main and upper decks beamier than before, the wide-body design pulls glazing from the master cabin all the way aft to the mid-point on the superstructure. The effect is threefold: larger interior volumes, a greater connection with the outside via the extra windows and a better visual balance between the hull and superstructure.

Glass was used strategically, to “break down the physical and visual barriers that separate man from the sea”, says Zuccon. “The concept of transparency on this project has a strategic importance because it allows the owner and guests to never feel far from the sea.”

It’s not just the mass of glass, which is substantial, but also the flexibility in its use. At the master cabin entrance a full pane of glass slides open, allowing a breeze to flow in. This entryway can either be set up as an office or, as it’s set across from a large walk-in closet, a changing room with a chaise for reclining. Likewise, in the upper saloon, two windows on either side can slide back to create a cross breeze effect.

“You have to feel like you’re on a boat — you don’t want to feel like you’re in a loft somewhere in the middle of Milan or Manhattan,” Galassi says, whose brief for the interior was “contemporary, but warm”. “I didn’t want a cold loft — that style is like disco music, it’s finished. You don’t want a space that could be anywhere. You must feel you’re on a boat, but in a comfortable, stylish way.”

Karen Paggi, sales director at Custom Line, who managed this project, says Galassi “knew exactly what he wanted. Like walnut — that was the first element we decided on, which shaped the rest of the interior.” A neutral palette was chosen, with matt walnut wood for the walls and joinery, white-bleached flooring and mocha, light grey and white furniture.

Columns that flank the main saloon were originally specced to be wrapped in metallic fabric, but Galassi vetoed this in favour of the Poltrona Frau leather, which led to leather details throughout the boat. It’s a clean, neutral palette consistent from room to room, without bling for the sake of it.

Telli can accommodate up to ten guests in five cabins

The mirrors on the ceiling in the main saloon run down only the starboard side, drawing the eye down the path of traffic flow forward, and this same design device is used in the upper saloon, with mirrors only to port, reflecting (literally) where guests will walk below.

Galassi’s tastes also dictated moving the sliding glass door and balcony from the dining room to the saloon, as the latter space is used more often. The sliding door and superyacht balcony open up across from the sofa in the main saloon, creating open vistas and refreshing breezes.

A similar feeling is achieved in the upper saloon, where the aft glass wall slides open and folds away, opening up the indoor space to the outdoors. It’s a chic beach house over a city loft any day.

Glass is used expertly inside as well. The new design of the superyacht staircase has a piece of glass down the centre to filter light down to the lower decks. There is also a cut-out in the bulkhead in the saloon foyer, so you can see all the way past the stairway and into the master suite, if the doors are open, which is exactly what Galassi wanted — an open, welcoming home, without too many corners for guests and crew to duck around.

The lower deck cabins are well lit thanks to large picture box windows in each cabin, which have portholes in each that open to let air in. Hull No 1 has a four-cabin layout with three doubles and one twin — though options abound, from four to five cabins.

Five Navetta 33s have already been sold. Hull No 2 is set to join the charter market, a prospect Galassi is pleased about, especially with the entertaining potential of the new Navetta 33. “This boat can become an entertaining party house — that is something we were missing from the Ferretti [Group]. So we invested a lot in audiovisual,” Galassi says.

The superyacht sundeck and upper deck have a customised audio system by California-based James, developed with the Ferretti Group’s in-house team to deliver the best sound for each outdoor space. There is also a custom system by K-array in the main saloon, with the speakers themselves cleverly hidden between strips in the ceiling headers. The cabin speakers are by Sonance.

The outdoor spaces are equally attuned for entertainment or relaxation. The sundeck television lowers from the ceiling and swivels to face the aft sofas or forward spa pool. The furnishings are low, moveable pieces by Paola Lenti, a minimalist yet comfortable style that mimics the furnishings in the interior living spaces, adding to a holistic design feel.

Beyond the sundeck is a big seating area forward of the bridge, and then, of course, there’s the superyacht beach club. The latter is revealed when the garage opens, freeing the tender. The main aft deck above is designed to complement this space. There is a big sunpad with a convertible backrest that can be moved so that guests can sit facing out over the beach club below, creating a mezzanine level above the bathing platform.

Many aft decks are devoted to under-used dining tables, so this is a great alternative. As Paggi points out, an owner could still add a table here if they wanted. “The outdoor spaces are where our owners customise the most,” she says.

Much of the R&D that went into the Navetta 33 had to do with the new hull. Galassi noticed that many Ferretti Group owners were looking to step up from planing to displacement hull performance, and he wanted something that was stable and smooth, opting for a highly efficient semi-planing hull with a bulbous bow, perfected during extensive CFD testing. Stabilisation is aided by Seakeeper ABT TRAC (underway and zero-speed) stabilisers.

The Navetta 33 is part of a wider offering of re-imagined yachts for Custom Line — the new 37 first appeared at Cannes in 2016 with six currently sold, and the Navetta 42 is already in the works with hull No 1 sold.

Galassi is positive about the growth of the new Custom Line range, and in particular of the Navetta 33 — there are already plans to double its mould as they are already into 2019 for the order book.

With clean lines, flexible spaces, quiet beauty and all the modern offerings a yacht owner could desire, those sequin-clad dancers — as well as Ferretti Group’s workers — will be busy for some time.