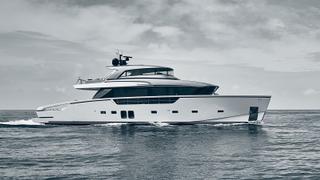 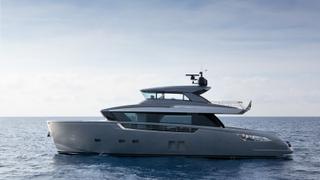 The letter X is arguably the coolest in the alphabet, so it is fitting that Italian yard Sanlorenzo opted to use it in the name of its SX line.

Here, the X stands for crossover – an apt choice, as these are yachts with hybridity, blending compact yet contemporary explorer capability with classic flybridge motorboat looks.

There are two crossover models in the line: the 26.7 metre SX88, with 7.2 metre beam, and the smaller and slightly narrower 23.8 metre LOA, 6.6 metre beam SX76. Sanlorenzo’s design DNA is apparent in both in the chunky, muscular lines. Reverse-raked windscreens on the flybridge and main deck create forceful, forward-leaning superstructures.

For the SX, the in-house team of the Italian yard, working with designer Luca Santella, used six decades of yacht-building heritage to made a bold design choice – relocating the wheelhouse to an upper flybridge. This frees up the entire main deck into a large, unified living area reminiscent of a city loft apartment, with all-round views through floor-to-ceiling windows obscured by only the slimmest of mullions. Freestanding furniture can be arranged to the owner’s preference, allowing modern, open-style living that matches the ethos of the line’s classic yet contemporary feel.

The SX comes with a variety of interior layout options. One of these is the choice to locate the master suite on the main deck, forward, where it benefits from light and 360-degree views. Otherwise, accommodation is on the lower deck, with the master suite in the centre. Both the SX88 and SX76 sleep eight guests.

Up top, the upper deck borrows a design idea from convertible cars to enable the carbon flybridge to be adapted to suit the weather conditions of the part of the world the yacht is exploring. Part of the curved wraparound windows can be hydraulically lowered for ventilation or raised to create a climate-controlled space. Behind the flybridge are sunpads; there is more lounging space on the main deck, fore and aft, where, once the tender and toys have been launched using a davit cleverly hidden in the handrail, the teak-clad platform transforms into a beach club.

Propulsion comes from Volvo Penta IPS 1050 engines (three on the SX88; two on the SX76), each delivering 800hp with twin propellers on a rotating pod, allowing top speeds of 22 to 23 knots. Hulls are designed by naval architect Lou Codega.

The first hull of the SX88 made its debut at the 2017 Cannes Yachting Festival, featuring the special edition soft, neutral and homely interiors by Piero Lissoni. For the SX76 that debuted at the same show last year, Lissoni designed a sinuous Guggenheim-esque staircase to link the main deck with the flybridge. Officina Italiana Design also collaborated on the SX88 and Zuccon International Project on the SX76.