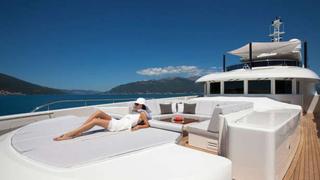 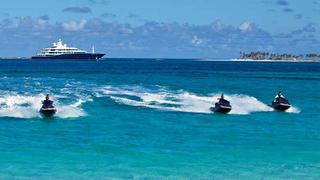 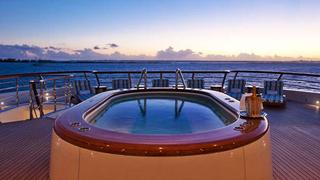 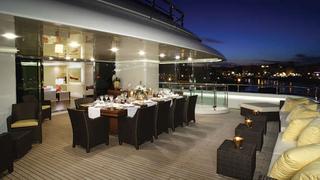 A day in the life of a charter guest

Chris Caswell has spent the last twenty years sampling the delights of numerous charter yachts in some of the most exotic destinations on the planet. Here, he provides a glimpse into what life as a guest on a charter yacht is like.

We are usually early risers but on a charter, we find ourselves lingering in that wonderful bed with the crisp sheets, listening to the complete silence broken only by the faintest hiss from the cool air conditioning.

There is a particular pleasure to feeling a warm teak deck underfoot as you savour a perfectly cooked meal, all while enjoying a spectacular view of a gleaming white beach awaiting the first footprint.

As we lingered over breakfast, the captain, crisp in starched whites, approached and, after inquiring what our pleasures for the day might be, he ticked off the possibilities.

The deck crew would be pleased to launch a couple of jetskis for us to zip around or they could tow us with the tender if we wanted to try out an inflatable water toy or waterski.

There were, we were told, some lovely reefs nearby that were perfect for snorkeling, with fleets of brightly colored fish that would delight in a few crumbs left from our breakfast. Snorkels, fins and masks were at the ready.

On the other hand, the sun was warm and that big sunpad on the flybridge was ready to help us achieve the perfect tan to show off at home after our charter.

Or, of course, we could choose to do absolutely nothing, and that was just fine, too. That comfortable lounge in the salon and an unopened spy novel can have a magnetic attraction.

Returning to our stateroom, we found that the crew had already freshened it up, and we enjoyed a leisurely shower with fluffy towels.

We chose to snorkel on this particular day, which worked up an appetite for a casual alfresco lunch on the bridge. As we finished, the crew hoisted anchor and we set off at a comfortable pace for another island that the captain promised was even better than this one. Was that possible?

Later that afternoon after anchoring, we enjoyed a jet ski ride that was wet, wild and filled with laughter. Back aboard, we took a warm freshwater shower on the swim platform and went directly to the sunpad on the bridge to dry off, catch a few rays, and doze. In a basket next to the sunning area was a collection of designer sun lotions for our use, and a stewardess appeared immediately with the offer of icy drinks.

Back in our stateroom, which had again been refreshed by the crew, we showered and dressed, meeting our guests in the salon bar for cocktails before sitting down to a formal five-course meal fit for a Michelin restaurant.

Later, we took our after-dinner drinks to the bridge and enjoyed the warm night air and clear skies. It soon became a game to see who could spot the tiny bright satellites now visible speeding across the dark sky far from the lights of civilization.

That night, we slept well.

We had asked the crew to leave a light breakfast outside our stateroom door on a table designed just for that purpose, but we certainly dont share the same definition of light.

On a silver tray was a pitcher of freshly squeezed orange juice, a pot of steaming coffee, and several plates with fluffy croissants, scones fresh from the oven and a few other pastry temptations, along with all the butter and marmalade we could imagine. Linen napkins and fine silverware, of course, and even a rose in a vase.

We were moored stern-first to a quay that could have been in St.Barts or St.Tropez or anywhere in between, and we intended to do a little sightseeing and shopping that day. The night before, our captain had asked if we wanted a car with a driver and, if we had agreed, it would have been waiting at the gangplank.

But we were in a strolling mood, and that was just how we spent several pleasant hours, enjoying the small shops and exploring on our own. We had lunch in a small cafe and returned to the yacht laden with bags, which the crew whisked out of our hands to our stateroom.

Knowing we would be tired, there were snacks and cool drinks awaiting us and we settled into the salon. The large-screen TV and huge library of movies was appealing, and the afternoon slid past in leisurely fashion.

Part of the pleasure of being at a quay is people-watching in the evening, and this was no exception. Our candlelit dinner was served on the afterdeck and the yacht was our private floating five-star restaurant where we were the only clients, so we lingered over brandy and cigars without feeling rushed. And there was no bill to settle, either.

That evening, there werent as many stars to enjoy overhead because of the shore lights, but we didnt miss them because we were all neck-deep in the bubbling spa on the upper deck. There is nothing like warm water (and regularly refilled flutes of icy champagne) to ease away any aches from a day of walking and shopping.

That night, of course, we slept wonderfully.

The Best Charter Superyachts Without a Cancellation Fee