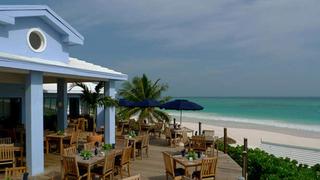 On the tiny three-mile long paradise of Harbour Island, known locally as “Briland” the mood is serene and the tempo slow. So, get out of Miami and head down to the Bahamas for a weekend superyacht charter

This sleepy island with its pastel-coloured 18th century houses has been a secret playground for rich Americans since the 1940s. The Rockefellers and the Duke and Duchess of Windsor visited and Helmut Newton, Mick Jagger and Bob Marley later followed. In the 1990s Harbour Island got a reboot, when India Hicks and her partner David Flint Wood moved here and media mogul Barry Diller and his fashion designer wife Diane Von Fürstenberg bought houses; the one-hour flight from Miami made it easily accessible. Then the achingly cool Chris Blackwell, of Island Records, bought the Pink Sands Resort and enlisted Biba founder Barbara Hulanicki to design the rooms in a Moorish/Bahamian style. It’s still one of the places to stay in the bahamas.

The social life of the island is played out in fabulous private houses. A dinner or lunch invitation from Anish Kapoor, Arki Busson, Bill Gates, Diane Von Fürstenberg, and Olivier and Zoë de Givenchy are much sought-after.

Say at the colourful and eclectically decorated nine-room Ocean View Club, locally known as Pip’s Place. Those wanting a simpler aesthetic can head to boutique hotel The Landing, decorated by India Hicks. For full-on luxury, though, stay in one of the rooms designed by Barbara Hulanicki at the Pink Sands Resort.

The Landing for a contemporary menu based on fresh produce, Ma Ruby’s Restaurant for local Bahamian fare, or head to Sip Sip for lunch. Also try the Pink Sands Resort, or one of the two restaurants at the Coral Sands Hotel.

Harbour Island is famous for the best pink-sand beaches in the world, which seem to glow at sundown.