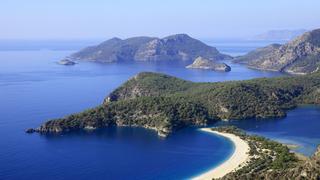 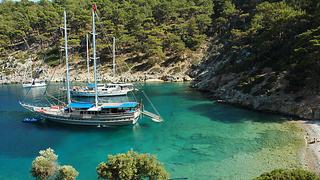 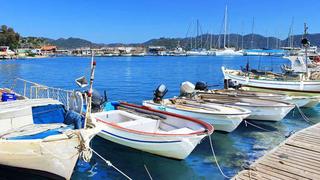 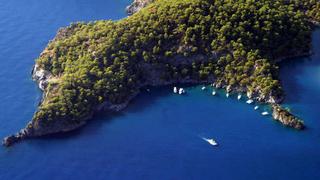 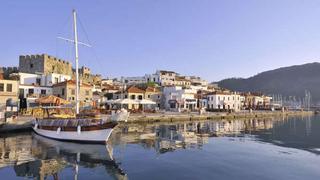 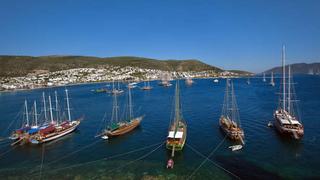 Beginning at the captivating seaside town of Feithiye in Turkey, explore the Turkish coastline, visiting both popular holiday destinations as well as some harder-to-reach locations.

Modern Fethiye is located on the site of the ancient city of Telmessos, the ruins of which can be seen in the city, including the Hellenistic theatre by the main quay.

This afternoon we’ll set off for Göcek, a sail of 11 nautical miles that will take us around 1 hour to complete. Göcek hosts six significant marinas that serve the yacht tourism in the region.

Tonight, you may like to enjoy a traditional Turkish feast onshore, there are many restaurants, cafés, and bars on the promenade. Or, spend your first night being taken care of by the hospitable Starfire crew.

This morning you’ll awake to enjoy the delights of Göcek. Numerous beaches and coves provide various opportunities for water sports, including windsurfing.

Alternatively, the ruins of various ancient cities – Caunos, Telmessos, Tlos, Pınara, Letoon, Xanthos and Patara – are all around 1 hours drive from Göcek.

In the afternoon, we’ll depart for Oludeniz – a sail of 18 nautical miles that will take around 1 hour 35 minutes.

Ölüdeniz is famous for its shades of turquoise and aquamarine, and is an official blue flag beach, and is frequently rated among the top five beaches in the world by travellers and journalists alike.

The more adventurous might like to try paragliding opportunities, and Ölüdeniz is regarded as one of the best places in the world to paraglide due to its unique panoramic views, and the Babadağ Mountain’s exceptional height.

We set off early in the morning for Kekova, a cruise of 61 nautical miles that will take us around 5 hours 30 minutes.

Along the edge of the island facing the mainland lie the captivating half-submerged remains of a sunken Lycian city, and some remains also from the Byzantine times. Further to the west, where the remains of a Byzantine chapel stand on the beach, you can try snorkeling to view more sunken remains.

In the afternoon we’ll sail for 3 hours (34 nautical miles) to Kalkan, where we’ll spend the night. Here you can discover more historical sites and fine beaches.

Kalkan is an old fishing town, famous for its white-washed houses, descending to the sea with brightly colored bougainvilleas. It averages 300 days of sunshine a year, so you’ll be sure to enjoy some warm rays!

We’ll spend the night here, and be sure to head out on deck to admire the twinkling Turkish night sky.

We have another early morning start as we depart for Gocek Bays, a cruise of 45 nautical miles that should take us 4 hours.

Gocek Bay, or the Gulf of Fethiye, covers around 60-70 square miles, with numerous enchanting anchorages, where you can swim and windsurf – or just relax on deck.

If you’re interested in heading ashore, most of the bays have a restaurant. With a large natural harbour, one of the pleasures of a visit to Gocek is a stroll around the marina and the waterfront is lined with bars and restaurants.

Inland life revolves around the pretty market square, which is lined with small shops selling antiques and crafts – or pick up an authentic souvenir, a Turkish carpet.

After another restful night, we set off in the morning for Delikada, which will take around 32 nautical miles, or 3 hours.

Delikada is a windsurfing and kitesurfing paradise, and the town has a number of shops catering to avid fans.

Alternatively, you may chose to take a trip on the Dalyan River and its delta, the breeding ground for caretta-caretta turtles. If desired, we can visit the ancient city of Kaunos, famed for the spectacular rock-cut tombs hallowed on the sheer cliff in the 5C BC.

While the town has around 28,000 inhabitants, this can swell to 250,000 during the height of the tourist-season.

History buffs should consider visiting Marmaris Castle, which was constructed by the Ionians and repaired during the time of Alexander the Great. It features seven galleries, containing a large variety of exhibits.

Or, we can cruise around the turquoise coves, exploring the mountainous shoreline and ruins of ancient cities. We can also visit a peninsula named Yıldız, which locals refer to as “Paradise Island”, and encloses the Bay of Marmaris.

Tonight, if you feel like an authentic Turkish meal, Marmaris has numerous local restaurants called ‘lokantas’ that can be found all around town.

For something a bit more special, you may like to head to Mr Zek, near the castle, or Dede or Uno Momento near the harbour. Or, enjoy the superb cuisine cooked by your Starfire hosts.

Your crew sets sail just after midnight to head for Bodrum, where you will spend your final two days.

The sail of 80 nautical miles will take around 7 hours 20 minutes, so you might like to head on deck when you awake to enjoy the cruise into Bodrum, for our expected arrival time of 9am.

Bodrum is a lively, popular holiday resort on the Aegean Sea, renowned in antiquity under its ancient name, Halicarnassus. In ancient times, Bodrum was the location of the famous (and now destroyed) Mausoleum of Halikarnassus, built after 353BC, and one of the Seven Wonders of the Ancient World.

Modern Bodrum is a fascinating contrast between the Ancient City – where there are discernable fragments everywhere in the town – and a playground for visitors. There are numerous shops and restaurants just waiting to be discovered – from humble cafes to exquisite restaurants serving modern Turkish cuisine.

The west side revolves around the Marina and Yacht Club with a number of nice restaurants and good clothes shops. During the evenings there is a wonderful atmosphere here as locals and tourists promenade along the sea front.

The east side of the town has a long thin beach with numerous bars, restaurants, and night clubs behind.

There are some good possibilities for windsurfing at nearby Vass where lots of stands hiring boards and sails, and competitions take place.

For the more culturally minded, the Ballet Festival will be taking place in August, along with a wide range of pop concerts at the Castle or in the two-centuries old Amphitheatre which has been lovingly restored in the last few years.

As your cruise comes to a close, you can be sure that you’ve sampled some of best glimmering waters and coastal towns that Turkey has to offer.