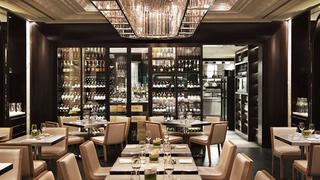 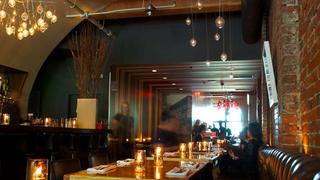 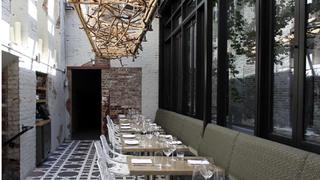 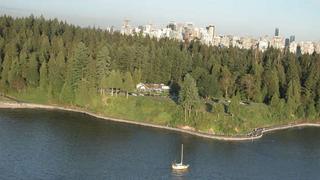 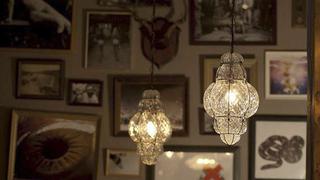 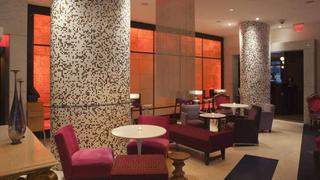 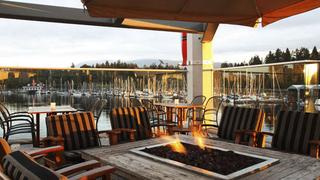 Vancouver’s dining scene is reflective of its proximity to the ocean and the farmlands of interior British Columbia, with restaurants in the city capitalising on the availability of fresh seafood and produce. Where to dine is always a hot topic on the lips of Vancouverites, so don’t be afraid to ask a local for advice if you’re seeking a specific type of cuisine. Here are a few options in downtown Vancouver, close to the Coal Harbour marinas.

Miku, at the ground level of an office tower facing the Canada Place cruise ship terminals, is a short walk from the Coal Harbour marinas and has a beautiful wrap-around terrace overlooking the water. If you’d prefer to dine inside or at the bar, you can still enjoy the views through the restaurant’s floor to ceiling windows. The menu consists of Japanese dishes with the occasional French or Italian twist. Their specialty is the rectangular Aburi-style ‘pressed’ sushi, but even the Maki-style rolled sushi goes above and beyond here. Try the Pacific Roll: albacore tuna, jalapeño and cucumber wrapped in shiso leaf and yellowtail with avocado sauce. If you don’t care for sushi there are plenty of other options, such as the Five Hour Slow Roasted Prime Rib with wasabi brown butter sauce. Contact: (604) 568 3900

Hawksworth Restaurant enjoys a prime position in the heart of downtown Vancouver at the ground floor of the newly renovated Rosewood Hotel Georgia. The menu is ‘Canadian contemporary’, crafted from locally and regionally sourced organic ingredients using cooking techniques that reflect Canada’s multicultural heritage. Head Chef David Hawksworth, who cut his teeth in Europe working at several Michelin-starred restaurants before returning to Canada to open his eponymous restaurant in 2011, has collected numerous awards including Vancouver Magazine’s prestigious Chef of the Year in 2012 and 2013. Choose from exquisite dishes such as the pan seared scallop with glazed pork cheek, chestnut agnolotti and hazelnut emulsion, or try the seasonal tasting menu, which changes frequently according to what’s fresh at the farms. Contact: (604) 673 7000

Chambar has been a firm favourite with Vancouver foodies since it opened on an unassuming block in a not yet gentrified pocket of Gastown in downtown Vancouver in 2004. Run by husband and wife team Nico and Karri Schuerman, the interior is cosy and warm, with gorgeous exposed-brick walls, polished hardwood floors, and soft lighting accented by glowing candlelight. Though Chambar calls itself a Belgian restaurant, the menu features French, Moroccan and Turkish influences, a winning combination that has earned it several Best Restaurant awards and a place in the heart of critics and the public alike. Try the Tajine d’aziz à l’agneau, tender bone-in braised lamb shank stewed in honey, figs, cinnamon and cilantro, served with cous cous. Contact: (604) 879 7119

L’Abbattoire is a sophisticated yet playful exposed-brick-and-beam gem located between Gastown’s historic Gaelor’s Mews and ‘Blood Alley’, Vancouver’s former meatpacking district. The menu is small but dishes are complex and wildly creative, stressing a farm to table concept. The wine list has been chosen with acute attention to detail to include both BC wines and a healthy supply of international varieties. Cocktails are excellent too; the skilled bartenders can whip up any tipple you wish, whether it’s a traditional vodka martini or one of their own concoctions, which tend to feature aged whiskey. Try to reserve a table in the narrow glass-walled atrium, facing the brick-lined alleyways behind the restaurant. Contact: (604) 568 1701

The Teahouse is that rare hybrid of restaurant that manages to combine an outstanding location with consistently good food. Perched on a slope in Stanley Park overlooking the Burrard Inlet, the dining room resembles an old-fashioned English tea parlour, with large bay windows giving spectacular views of the mountains and water. The menu is heavy on the seafood and consists of unpretentious but well-executed dishes showing off BC’s finest delicacies: wild BC salmon with lemon caper sauce, Pacific roasted sablefish with miso marinade, or the simple but exquisite fish and chips, prepared with ling cod and a light tempura batter. Save room for the white chocolate cheesecake. Contact: (604) 669 3281

Vancouver nightlife is tame in comparison to most cities of its size, but it’s getting a boost from some newcomers who have moved into the gentrified Gastown district near the Coal Harbour marinas. A word of advice: stay off the ‘club district’ of downtown Granville Street (the ‘Granville Strip’) if you’d prefer to avoid the under-25 crowd. Check out the Gastown and Yaletown neighbourhoods in downtown Vancouver, in close proximity to the Coal Harbour and Yaletown marinas.

HouseGuest is the closest thing you’ll find to a European-style supper club in Vancouver. The dining room on street level serves sophisticated dishes to a crowd of trendy young professionals, who head downstairs for intimate post-dinner drinks. Down the street, Chill Winston serves great cocktails and attracts the artsy Gastown residents – its spacious outdoor patio spills out onto the cobbled streets in the summertime. If you’re feeling a bit more adventurous you can duck into the speakeasy-style Keefer Bar in nearby Chinatown, a sexy locale with a whisky-focused cocktail menu and live music and art performances.

Yaletown is an upscale enclave of pricey condos, boutiques and restaurants that borders the marinas opposite Vancouver’s Olympic Village. Bar None nightclub has long been a favourite for the ‘Yaletown yuppies’ who live in the area; this is where to go if you want to sip Champagne cocktails before hitting the dancefloor. The bar at the chic Glowbal Grill is where the rich and beautiful flock, many of whom will have already stopped for a drink at the trendy OPUS bar at the boutique-style Opus Hotel, or will be heading there later.

Located along the Coal Harbour waterfront, Lift is a gorgeous restaurant with a beautiful bar and dining area surrounded by windows overlooking the marinas. Try to steal a spot at the outdoor patio, set around an open fireplace. Tableau, the French bistro in The Loden boutique hotel, located amongst the glass residential towers of Coal Harbour, has a great bar for after-dinner drinks, but it’s best to have another venue in mind for later if you want to stay up late – it’s only open until midnight. If you’re visiting in the summer, have a drink at Reflections, the rooftop bar at the Rosewood Hotel Georgia, for stunning views of the city and a laid-back, outdoor lounge vibe set around an open firepit.