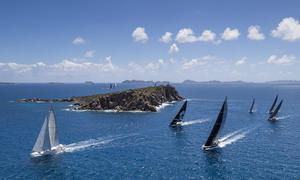 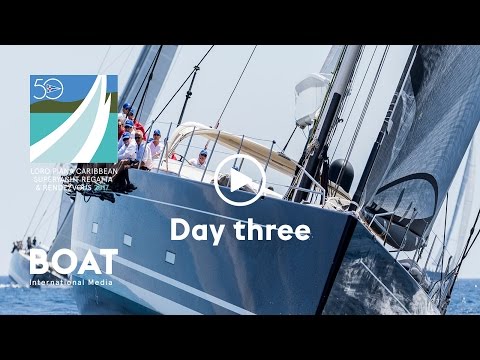 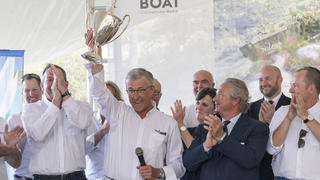 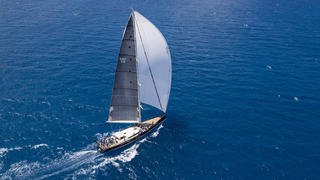 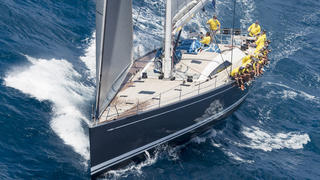 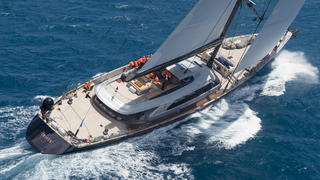 It is the second consecutive year and third time in the past four years that the 111-footer has won the trophy at the seventh annual regatta. Built by Baltic Yachts, Nilaya won all three races in Class A by an average of more than 6 minutes.

“It comes down to good management and, of course, a great owner,” said tactician Bouwe Bekking. “Without a great owner you can’t put a good team together and he puts a lot of emphasis on good team work. It’s a combination of a couple of pros, a lot of friends, and a lot of history; we’ve been sailing together for nearly seven years now.

“The boat likes the medium to medium-heavy conditions we had this week,” Bekking said. “The boat was well prepared. The owner bought all new sails. It just went well, the whole week.”

Nilaya also won the Loro Piana Cup for winning Class A, as did the 38m P2 in Class B, the Swan 90 Freya in Class C and the 60m Perseus 3 in Class D.

With a brisk wind of 13 to 20 knots propelling the 17 yachts around the 23-nautical-mile course set about the Sir Francis Drake Channel, P2 won its final race showdown with Ganesha to capture Class B.

The two were tied on points heading into today’s finale, but the P2 crew signaled their intention to take no prisoners this morning when they fired their cannon—a 39-inch barrel, 2-inch bore armament that was captured from the French frigate Le Medee in 1801—upon leaving the YCCS dock. When they fired it again after finishing, everyone in ear shot knew the job had been done.

“The cannon has become our signature move,” said Tony Rey, the tactician. “The poor fellow who has to fire the cannon has the hardest job because you don’t want to misfire. But we had a great race with Ganesha, it seems it always comes down between us. Matt Humphries and the guys on Ganesha are incredible competitors. We like to think we’re getting better and better at sailing P2. We all take pride in getting on the podium here. It’s a big deal.”

Don MacPherson’s Freya also captured its second consecutive class victory and third in the last four years, winning all three races in Class C by an average of more than 5 minutes.

“It was a fantastic week, we did well because we’re a crew,” said MacPherson. “It was really good racing and we made very few mistakes. I attribute our success to the crew, they did a great job.”

MacPherson is no different than Nilaya’s owner; there’s always a new sail to purchase. “The new sail this week was the yellow A2 spinnaker. I think it was a great sail for us. We sailed quite well downwind,” said MacPherson.

In Class D the 60m Perseus 3 completed its first class victory with a come-from-behind win. She suffered a problem with its roller furling system that prevented the crew from using the large headsail for half of the race’s upwind work. The crew was able to get the issue sorted out in time to score a 45-second win over Action, the new 123-footer from Dykstra Naval Architects and built by Royal Huisman.

All winners were congratulated at the final awards presentation, signaling a fantastic end to another successful Loro Piana Caribbean Superyacht Regatta & Rendezvous.

“The Loro Piana Superyacht regattas represent one of the highlights on both sides of the Atlantic and these last four days have been incredible,” said YCCS Commodore Riccardo Bonadeo. “Here we have such a range of boats, from the smallest at 23 metres to the largest at 60 metres. We also have classic designs from 1998, such as Wild Horses, to new boats, such as the Swan 115 Shamanna. I want to thank our title sponsor Loro Piana for supporting us and the owners who make all of this possible. I look forward to seeing you in June in Porto Cervo and in 2018 back here in Virgin Gorda.”

See more pictures from the regatta on the Boat International's Media Bank.