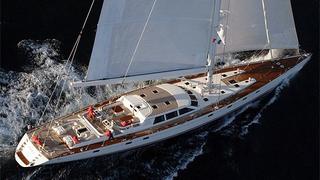 Fraser Yachts is showing their committment to the upcoming Palma Superyacht Brokerage and Charter Show (May 1st to 5th) by displaying no less that eight yachts.

Built by Baltic Yachts in 2003, the 42.93m Canica's spacious interior by John Munford accommodates up to nine guests in a master suite, VIP stateroom and two twin cabins plus a Pullman berth.

The interior is classically styled with mahogany panelling throughout. It reflects light, warmth and the split level provides space and comfort. The raised navigation and casual dining area offer panoramic views, while the forward lower-level dining and seating areas are light and inviting.

Built by Nautor’s Swan in 2000 to a design by German Frers, the 34.34m sailing yacht Mystery was the second hull in her series and was extensively refitted in 2008. Her interior by Dick Young sleeps eight guests in four cabins.

ABS classed, the 33.6m Imagine B was built in 1993 at the Alloy Yachts yard in New Zealand and refitted in 2008. She was designed by Ed Dubois, and features an Agnes Comar interior.

She can sleep up to seven guests in one master, one double and one twin cabin, along with one Pullman berth. A 570hp Lugger diesel engine offers a maximum speed of 12 knots and a cruising speed of 11 knots.

Built by De Beer in 1962, the 32.6m Lady Ecosse has had several major refits, most recently in 2011. Eight guests are accommodated in four staterooms including a master suite on the main deck while twin 350hp Gardner engines give her a range of 5,800 nautical miles.

Originally commissioned by the Norwegian navy in 1978, the 31.3m Wisting was converted into an expedition yacht in 2005/2007 to satisfy her current owner’s desire for worldwide cruising. Accommodation is for eight guests in three double and two single staterooms and twin 200Kw, C9 Caterpillar generators give her a top speed of 11 knots.

Built in 2001 by Ferretti and refitted in 2011, the 27.45m Vintage accommodates 10 guests in a master suite, VIP stateroom and two twin cabins, each with a Pullman berth while twin 800hp MAN engines give her a range of 2,000 nautical miles.

Designed by Stefano Righini and built in 2008 to RINA class, the 26.49m Aziumt Ines features accommodation for ten guests in a master suite, VIP stateroom and two twin cabins (each one with Pullman) while twin 2000hp MTU engines with only 209 hours on them power her to a cruising speed of 39 knots and maximum speed of 44 knots.

The 25.6m pocket superyacht Voyager is powered by two Caterpillar 250hp engines that allow her to reach a top speed of 11 knots and cruise comfortably at 10 knots. Voyager sleeps six guests in three cabins and boasts a professional and attentive crew of four.