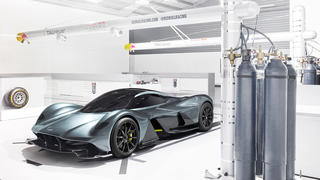 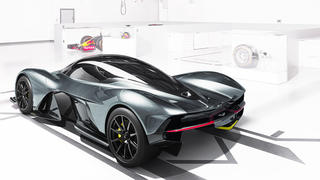 Luxury British car brand Aston Martin has teamed up with Red Bull Racing – the innovative automotive team best known for its Formula One pursuits – to create the AM-RB 001 hypercar.

Billed by the collaboration as the world’s fastest road-legal car, the AM-RB 001 is powered by a mighty V12 engine and, although a top speed has not been announced, it is believed the hypercar will be capable of achieving a lap time faster than most modern Formula One vehicles.

The brainchild of Red Bull Racing chief technical officer Adrian Newey and Aston Martin chief creative office Marek Reichman, the idea for the AM-RB 001 is said to have been dreamt up over a pub lunch and will be Newey’s first road car.

While it may not have the luxury factor of, say, the Rolls-Royce Dawn or driverless Vision Next 100, the two-seater vehicle will boast notable technical innovations such as a weight of less than 1000kg. This is around a third less than similar hypercars from Ferrari and McLaren but, with an estimated 800bhp+, the AM-RB 001 plans to pack just as much power into its lightweight package resulting in some seriously impressive speeds.

While there are still some technical details to iron out, the hypercar will eventually go into production at Aston Martin’s Gaydon plant with no more than 150 examples – including 25 track-only versions – to be produced. However, if you fancy getting your hands on one, you’re going to need deep pockets and good connections. The AM-RB 001 will be priced between £2-3 million with first deliveries expected in late 2017 and, according to Aston Martin boss Andy Palmer, demand is already three times oversubscribed.

“Working at Aston Martin means you get to be a part of some truly special projects, but the AM-RB 001 is a dream - a true once-in-a-lifetime opportunity,” said Dave King, Aston Martin VP and chief special operations officer. “Of course it’s a huge engineering challenge, too, but we’re all motivated to achieve great things and take Aston Martin to the absolute pinnacle of road car performance.”

“I’ve long harboured the desire to design a road car,” added Adrian Newey. “The synergy between Red Bull Racing and Aston Martin is clear. I knew Red Bull Racing had the ability to handle the pure performance aspects, but Aston Martin’s experience of making beautiful, fast and comfortable GT cars is of great benefit to the project. That’s the secret we’re trying to put into this car - the technology that allows it to be docile and comfortable, but with immense outright capabilities.”

Rolls-Royce Dawn: Meet the car as luxury as your superyacht