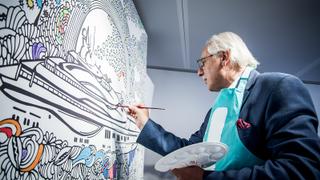 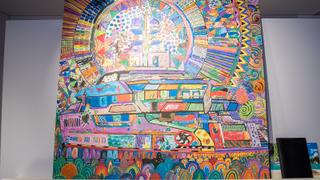 If you visited the Lürssen stand at the Monaco Yacht Show you may have noticed something a little out of the ordinary going on. Alongside the usual yacht models and brochures were four enormous canvasses depicting some of the builder’s most famous yachts: Quattroelle, Lady Lara, Solandge and Elysian.

Throughout the show these initially black and white canvasses were transformed into colourful paintings by visitors to the booth – including yacht designers such as Tim Heywood, Espen Oeino, Dan Lenard, Carlo Nuvolari and Pascale Reymond – each of which also contributed their signature to the finished work.

These four paintings are now being offered for sale through an online charity auction. All proceeds from the sale will be donated to support the work of the Blue Marine Foundation, whose projects in areas as widespread as Lyme Bay and the Solent to Belize’s Turneffe Atoll and the Chagos Archipelago in the Indian Ocean are vital to improving and conserving the health of marine life around the world.

An important note for bidders, however, is that this auction is not like a traditional auction. In order to raise as much money for the Blue Marine Foundation as possible, when placing a bid you will pay only the incremental difference between your bid and the previous bid but are committing to pay this regardless of whether yours is the winning bid or not. A subsequent bidder can top your bid and so on with the last bidder being the winning and minimum bids starting at €25. Each painting is valued at €10,000 and Lürssen has kicked off the bidding by committing the first €5,000 to each painting.

Bidding is open until November 20, 2018 at auction.lurssen.com.