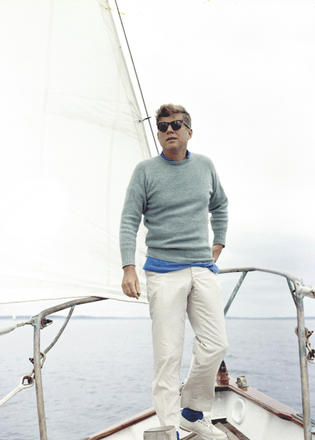 Book it now: Kennedy – The Sailing President at the Yachting Heritage Centre

To celebrate what would have been President John F. Kennedy’s 100th birthday on May 29, 2017, the Yachting Heritage Centre in Flensburg, Germany will be hosting an exhibition commemorating his love of sailing. Kennedy – The Sailing President will tell the story of Kennedy’s passion for the ocean and the numerous boats he owned through iconic photos and exhibits from the President’s life.

Kennedy’s love for sailing began when he was given a dinghy named Victura for his 15th birthday, which he would sail near the family’s summer home on Cape Cod, and grew throughout his life with a sketch of a sailboat being the last thing drawn by JFK at the Rice Hotel just hours before his assassination.

Despite barely escaping from a sinking patrol boat during World War II, a feat which his family ascribed to a knowledge of the ocean honed through his days sailing Victura, Kennedy went on to own a number of yachts throughout his lifetime. As a young married couple John and Jaqueline Kennedy were often seen on board the motor yacht Honeyfitz and in 1962 attended the America’s Cup in Rhode Island to see their home team, the New York Yacht Club, claim victory.

Kennedy’s final, and most famous, presidential yacht was the 1937 Sparkman & StephensManitou which Kennedy had converted for use as a floating presidential base enabling him to entertain world leaders and conduct official business without leaving his beloved boat.

The upcoming exhibition will delve into the stories behind these boats, exploring why Kennedy chose them and what became of them later, along with telling the story of America’s famously charismatic and enthusiastically seafaring politician.

Status symbols: Presidential yachts from around the world

Our favourite royals at sea