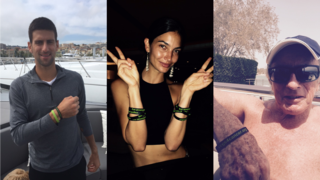 International celebrities have come out in force to show their support for the annual cogs4cancer charity cycle. Stars including Rihanna, Novak Djokavic, model Lily Aldridge, Sir Jackie Stewart and Roman Abramovic, owner of superyacht Eclipse, have all ben snapped wearing the charity’s wristbands. Appropriately for the yachting-backed charity, many of the celebrities showed their support from the deck of a superyacht.

2015’s team includes riders from superyacht companies including Y.CO, Fraser Yachts and Edmiston – many of whom have also joined the growing list of sponsors helping to make this event possible.

Having started on October 5 in Barcelona, the riders will travel to Figures, Narbonne and La Ciotat before finally finishing in Antibes on October 9.

On October 9 cogs4cancer will also offer the public the opportunity to join the team riders as part of a Tribute Ride covering the last 82km stage from Cogolin to Antibes. After all that hard work riders, sponsors and supporters alike will have an opportunity to let their hair down and celebrate their success at an after party at The View Restaurant in Juan Les Pins.

To date cogs4cancer has raised over €613,000 – with nearly €215,000 raised this year alone. There are two days of cycling still to go which leaves plenty of time to make a donation, join the Tribute Ride, buy a ticket to the after party or track the riders progress - simply visit cogs4cancer.org.