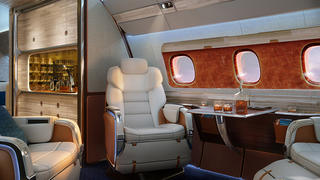 Wines taste different at altitude and, as Jonathan Ray reveals, airlines now go to great lengths to ensure your landings are happy

There’s not much point in having a private jet or travelling first- or business-class with a swanky airline if you don’t make the most of it and drink well. But while your superyacht may have the best wine glasses and wine cabinets and you have a host of UK wine merchants that deliver to your yacht on speed dial - getting there can be a different story.

Airlines used to be notorious for the poor quality of their wines. They were probably ordered by someone who had just ticked life jackets, headrest covers and rotor blades off their list of purchases before getting to wine, which, for them, was just another commodity. Today, though, airlines have specialised wine buyers, dozens of consultants (many of them Masters of Wine), astonishing purchasing power and dedicated facilities.

They have finally twigged that although food and drink might be low on customers’ lists of priorities when booking a flight, by the time they stand at the door of the aircraft, the menu is usually second only to safety. Once they finally settle in their seats, “what am I going to eat and drink?” is their only thought.

Singapore Airlines, for example, has spent a fortune developing a unique pressurised tasting room for its wine buyers that mimics exactly the pressure inside an aircraft cabin at 35,000 feet – wines taste very different aloft from how they do on the ground. Lufthansa, meanwhile, has a converted Boeing 747 in which the buyers sample their wines.

Emirates has recently invested €450 million in wine to lay down, going direct to top producers such as Lafite, Latour and Dom Pérignon, rather than using intermediaries. On any given day, roughly 60 wines, Champagnes and ports are served to Emirates passengers of all classes, and the airline currently has some 1.2 million bottles ageing in its own cellars in Burgundy. Some of them won’t be ready to drink until at least 2020.

When stocking your own jet look for wines with balance, freshness and fruit

But what could be more fun than stocking your own jet? In which case, look for wines with balance, freshness and fruit. Avoid overly acidic wines or those with high levels of tannin, since these characteristics become more pronounced in the air. Similarly, wines that are high in alcohol tend to become soupy.

Recent airborne (or pre-flight) alcoholic highlights for me include 2004 Pol Roger Brut Champagne in Qatar Airways Premium Lounge at Heathrow’s T4; Bollinger NV Rosé Champagne in BA first class to Delhi; 2008 Tapanappa Chardonnay and 2003 Château Léoville-Poyferré in Emirates’ first class lounge in Dubai; and Taylor’s 10 Year Old Tawny Port in Singapore Airlines business class to London – during which flight, incidentally, I discovered that with Singapore you get what you pay for: first-class passengers drink from crystal; business-class drink from glass; economy from plastic.

A fine glass of wine is an essential tool for lifting one’s spirits when travelling. But whether you’re drinking your own wine in your own plane or an airline’s wine in an airliner, remember: one glass in the air is the alcoholic equivalent of two on the ground.

Krug’s 2000 Clos d’Ambonnay ( bordeauxindex.com) is only the fourth vintage of this 100 per cent pinot noir Champagne; it’s regarded by many as the finest blanc de noirs. Produced from a vineyard of less than a hectare, there are only 5,158 numbered bottles available. £8,130 for six bottles. For the same price you could buy…

2) 98 bottles of Glenfarclas £511.19s.0d Family Reserve. Marking the 150th anniversary of the Grant family’s purchase of its distillery, this single malt is nutty and chocolatey. thewhiskyexchange.com

The best Christmas tipples and gifts for your superyacht bar