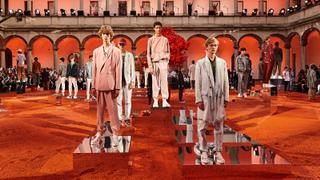 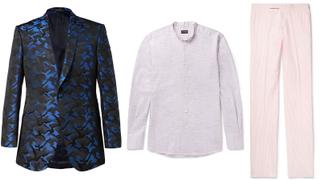 From blousons to bleached jeans, pastel suits to printed DJs, it’s time to throw out the old rulebook when it comes to men's summer style, says Robert Johnston...

In the past decade menswear has experienced a revolution, perhaps the greatest in a century since the lounge suit was adopted as the defining male uniform. The suit hasn’t been abandoned – far from it – but today it has to share its position in a man’s wardrobe with a range of alternatives. And, in turn, the suit has discovered it has a new role, as much at home on a weekend paired with a T-shirt as with a tie in the office.

The rise of sneaker culture might have started as a spin-off from sport, when basketball icon Michael Jordan teamed up with Nike, but today it is a fashion fixture, with the likes of Gucci, Balenciaga and Dior Homme transforming the trainer into must-have footwear. Kanye West’s Yeezy collaboration with Adidas caused a feeding frenzy among devotees.

The marriage of luxury and street wear is one of the biggest trends of recent years. Jogging bottoms have morphed into evening wear in luxurious blends of silk and cashmere, and Kim Jones at Louis Vuitton teamed up with Supreme – one of the hottest street brands on the planet – to create a collection that reportedly sold out in seconds.

Until recently men had to settle for black tie for formal occasions. Now at Tom Ford tuxedos can come in a dazzling range of shades of velvet, while Savile Row’s Richard James created a sellout dinner jacket in a brilliant camouflage print silk jacquard, and Alexander McQueen has used extravagant beading on evening coats.

Meanwhile, the blouson has evolved into an alternative to the blazer, with Italian tailoring labels creating luxury versions that can be worn to work – at Fendi that includes wearing it with a tie.

So what should you be wearing this summer? Here are a few trends to look out for. Expect suits to come in ice cream shades. Pink continues to be one of the coolest colours for men, with the likes of Berluti and Ermenegildo Zegna giving it a grown-up twist, while Tom Ford took the casual route with lightweight pink jeans, perfect for the Riviera. Bleached jeans, once dismissed as being “dads’ denim” are back, as is extreme distressing.

Louis Vuitton, among others, is giving the Hawaiian shirt a luxury makeover. Look out too for generously cut high-waisted pleated trousers held up by skinny belts. Giorgio Armani’s slouchy take on relaxed men’s tailoring has always been a key look for the designer.

Finally, you might need to steer clear of certain trends. This year, the ultra-short shorts from Prada require more courage than most of us possess to pull off.