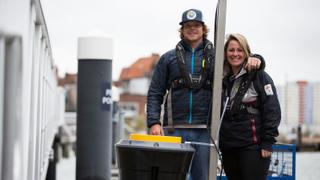 As part of its on-going commitment to healthier oceans following the 35th America’s Cup, Land Rover BAR has announced the installation of the UK’s first Seabin on the pontoon of the team’s base in Portsmouth Harbour.

Land Rover BAR’s device will sit alongside 1,000 oysters in protected cages that were introduced in 2015 as part of a scientific project and works as an automated rubbish collection device. Just one of the many gadgets helping save the oceans, the Seabin device gathers floating debris and micro-plastics down to 2mm and is capable of collecting up to 83,000 plastic shopping bags or 20,000 plastic bottles per year. It is expected this recent installation will help rid the Camber of half a tonne of debris, including pollutants such as oil and detergent, each year.

An early supporter of the initial croudfunding campaign that helped get founder Peter Ceglinski’s Seabin Project off the ground, Land Rover BAR has been working exclusively with sustainability partner 11th Hour Racing for a number of years to reduce its environmental impact and research innovative new methods to have a positive impact on the oceans.

"The collaboration with Seabin Pty forms part of the team's on-going drive to become the most sustainable sports team in the world,” said Jo Grindly, chief operating officer of Land Rover BAR. “The ocean is our playground and when opportunities come along to partner with exciting and innovative projects, such as the Seabin, we are really keen to support and work together to help improve the health of the oceans."

It is estimated that over 80 per cent of the eight million metric tonnes of plastic entering the seas each year comes from land-based sources making it the biggest threat facing our oceans. Once plastic has made its way offshore it degrades into tiny pieces of micro-plastic which are incredibly hard to remove, making the Seabin a vital tool in fighting this crisis. "The team at Seabin acknowledge that the real solution to ocean plastics and littering is not technology, but education, science, research,” commented Seabin CEO Peter Ceglinski. “The innovative Seabin project is also a tool to inspire and engage the next generation, with the ultimate goal to live in a world without the need for Seabins."